by Darren McCullins
in Music Reviews 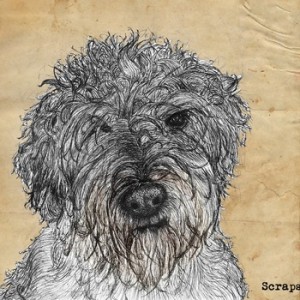 Male singer-songwriters, there’s a lot of them isn’t there? With thanks to dear Damien Rice for condemning the lonesome male musician to forever shake the depression tag, Tom McConnell has got something rather happy going on in his debut EP Scraps. The young Portstewart export has served up four songs that amount to just less than twenty minutes of ear companionship. Having taken Scraps in, it seems clear that McConnell has captured a time in his life: nice to see in a young musician as this important feature often goes missing when sitting down to write something that might just get you noticed.

Scraps opens with ‘Dead Man’s Shoes’, this chirpy song title now has you reverting to the opening Damien Rice reference and how this guy is actually fairly feel good: don’t be disheartened, I have not led you astray. The title doesn’t give much room jazz hands and stretching smiles but the rhythmic clicks and general tone of the track gives the EP a probing folk-soul atmosphere right from the off. The first track also tells us that Tom McConnell sings his songs and that is a major pillar in how he constructs them. This singing idea also means a lack of that lazy muttering thing some lesser known singer-songwriters lend. As an opening track, it sends us along the right path.

Next up is ‘Show You How’, the song that is most likely to have your friend turn to ask who this fellow is that you have playing. The upbeat soulful sway is that happy thing I was talking about earlier plus there is the added bonus of hearing the comforting homeland accent as he sings ‘how’. The penultimate track is entitled Flags not Flegs, somewhat disappointingly. It is a fine collection of acoustic guitar slapping and feet stomping, and is atmospheric and purposeful for the most part. One downfall however is the unexplainable Tom Waits-esque interludes which come from nowhere and really, in truth, do not fit the character of Scraps as a whole. Sending us off is ‘Old Edinburgh Town’. In terms of general character this is the lone wolf of the EP as McConnell slows the pace in his love letter to the four flippant youthful years he spent in the Scottish capital before relocating to South-East England. Its genuine words send the image Tom in the city streets; rucksack on back, guitar in hand and a grimacing smile. It is a personal goodbye that attests that this EP is the artefact to mark the closing of a chapter of Tom McConnell’s life, what could be the first of a number as a musician.

As a debut EP, Scraps is a confident attempt that is obviously composed with purpose. Stand out songs are a tossup between Old Edinburgh Town and Show You How, although each will give you something different. Reminiscent of London born Bobby Long in his ‘folk-soul with a touch of blues’ slant, Tom McConnell has the beginnings of what could become his signature style and the foundations to take his music further to really push his head above the masses of guitar slung men who share his dreams. It will be interesting to see where McConnell’s songs to follow will take him; I just hope he leaves his Tom Waits imitation in the shower when a follow up EP or album finds its way to our ears.