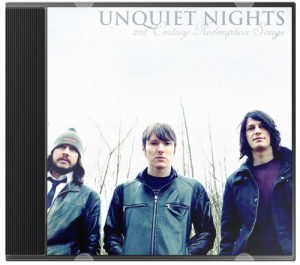 I find it very hard to believe that ’21st Century Redemption Songs’ is the debut album from Unquiet Nights. Clean cut and polished, each instrument has its defined role to play, rather than adopting the wall of sound noise that so many modern rock and indie bands tend to opt for. These guys sound a lot more ‘veteran’ than ‘mere upstarts’.

There are parts of the album that sound like the Brit-pop soundtrack that hung on the mid-nineties, where rock and roll went hand in hand with sing-a-long vocals. ‘Burning the Tracks’ has a riff not dissimilar to that of an ‘Ocean Colour Scene’ song, whilst Luke Mathers vocals on ‘Shoulda Said Something’ could almost be mistaken for Charlatans’ Tim Burgesss; if it weren’t for the distinct lack of spit and swagger.

There is also a taste of Americana on offer here. The Guitar riffs never overshadow the rest of the song or overstep their boundaries between John Rossi’s bass and Rodger Firmin’s drums. Songs such as ‘Silent Picture Show’ and ‘Someone’s Love on Drugs’ have the dreamy guitar backing that wouldn’t be out of place on an R.E.M. song – whilst the insatiably catchy intro to ‘Triggerfinger’ certainly has an American saloon-drinking gun-slinging outlaw vibe to it.

The amalgamation of their individual musical influences works for the most part, and you can listen to ‘We Are the Ones’ for concrete proof of this. The only way for this band to improve would be to kick everything up a notch, take the safety off and come back with a vengeance.