by Tommy Greene
in News

Earlier today, AVA revealed their awaited line-up for 2016’s installment of the live electronic music and visual arts festival. Names that immediately catch the eye from this year’s expanded line-up include: German techno heavyweights Rodhad and Gerd Janson; Bicep; Pariah and Blawan’s favoured techno head and practitioner in Dublin’s Sunil Sharpe; Glasgow duo Optimo; Belfast’s Phil Kieran; as well as Dublin’s Mano Le Tough. In and amidst some of these more seasoned performers, though – as the festival’s mission statement makes fairly clear – there is again a good deal of playing space devoted to bringing in newer, more up-and-coming talent from Northern Ireland.

It’s also worth mentioning that the event includes a free daytime conference running between 11:00 and 15:00, which includes a variety of lectures, workshops, record sales, and direct Q & A sessions with established artists (yet to be announced) in the field of electronic music. Later on, Optimo will head this year’s Boiler Room show. For a flavour of what to expect here, check out their rowdy two-and-a-half-hour Boiler Room with Harri & Domenic at Glasgow’s Sub Club, and last year’s AVA performances all from locals Bicep, Space Dimension Controller, John Daly, Schmutz and Timmy Stewart.

Considering this will be only the festival’s second year, the above acts are some impressive names to pull in. Tickets are reported to be selling at a rate of knots, so if you’re interested in going it’s advised to get your bookings in early.

Belfast’s AVA Festival 2016 will take place at T13 on 4th June 2016. Tickets are available via the AVA Festival website. 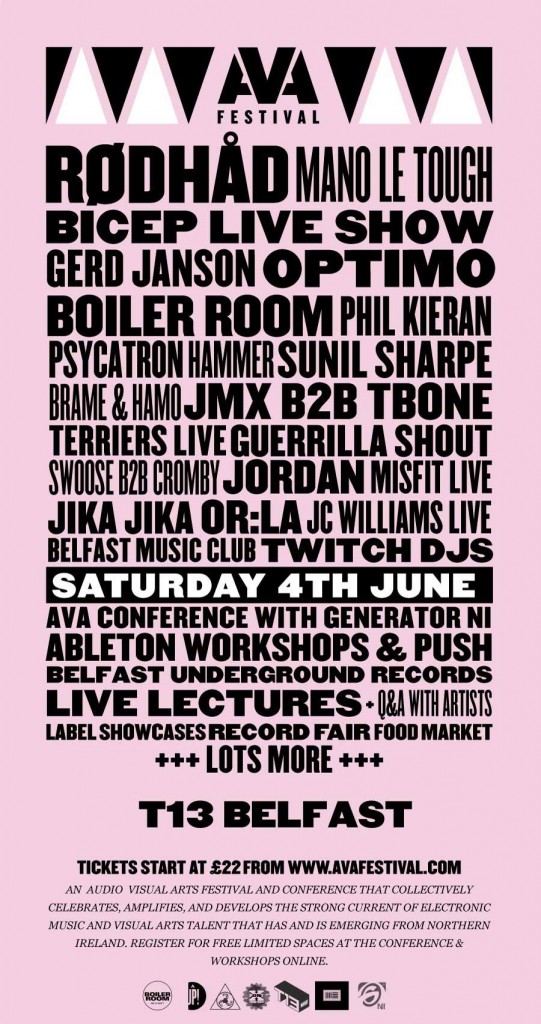