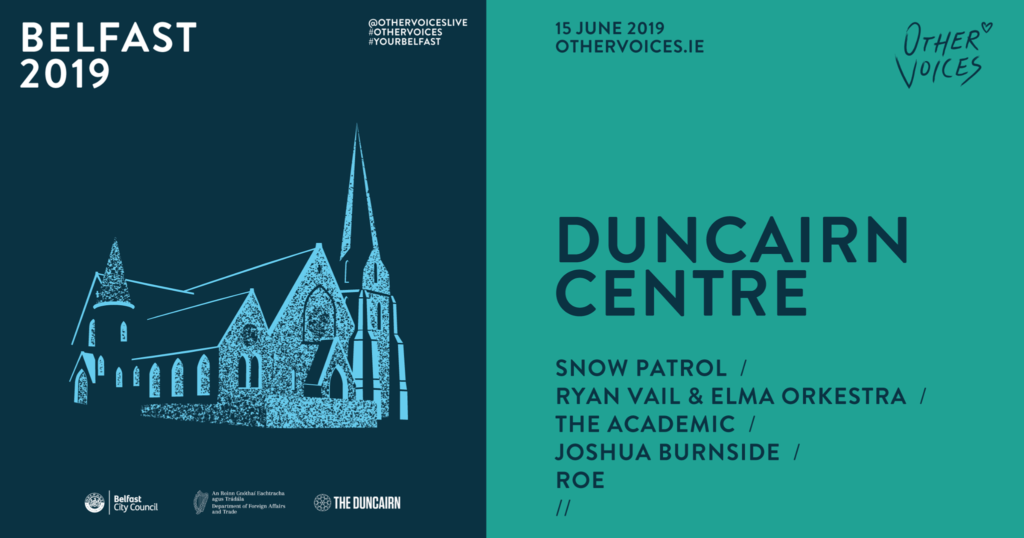 Other Voices returns to Belfast

The prestigious Other Voices made its last and first visit to Belfast back in 2017, showcasing some of the best acts locally and from around Ireland. Now they’re set to return on Saturday 15th June, once again in Belfast’s picturesque Duncairn Centre.

The centre piece of Other Voices in the Duncairn will feature winners and nominated artists of both the Irish Choice Music Prize and the NI Music Prize. The biggest name on the list however is none other than Snow Patrol, set to play a stripped back set. Fresh from their huge 35,000 capacity Ward Park 3 show, this is the rarest of opportunities to witness them in the most intimate of settings, marking 10 years since their first Other Voices performance in Dingle.

It will also showcase the collaborative effort Borders featuring Derry duo Ryan Vail and Elma Orkestra, one of the most anticipated releases of the year. Also playing are Choice Music Prize nominated indie rock four-piece The Academic and one of the biggest rising stars in Northern Ireland in ROE. Rounding out the bill is Joshua Burnside, who won the NI Music Prize for his debut album Ephrata.

Tickets for the Other Voices Belfast showpiece in the Duncairn are only available to win through various competitions, to be announced soon.

If you miss out on tickets for the main however, Bullitt Hotel will swing its doors open wide and host 2 floors of music on the same night, flooding Belfast with an array of talent. The Courtyard will play host to songwriters David C Clements and Rebekah Fitch, alongside rock acts Hot Cops and New Pagans. While Babel Rooftop will be an electronic showcase for Marion Hawkes, Arvo Party, Venus Dupree and Mount Palomar.

Excited about the event, – Ray Giffen Arts and Events Manager Duncairn Centre for Culture and Arts said “To say that we are over the moon to have Other Voices returning to The Duncairn and our wonderful city is the understatement of the year. Central to the shared vision, and delivery of both organisations, is a love for music and the recognition of its power to inspire, unite and lift the spirits of people. We are extremely proud of our fantastic musical heritage, and having events such as Other Voices ,only enhances the reputation of a creative, dynamic and modern Belfast”

Philip King, Director of Other Voices said “We are delighted to bring Other Voices back to Belfast, one of the world’s great musical cities. We are honoured to work again with our friends at The Duncairn in north Belfast to use the power of music, creativity and ideas to bring people together and to guide us all towards a better future.  The event is made possible by the support of Belfast City Council, The Department of Foreign Affairs and Trade (Reconciliation Fund) and RTE”