by Dan Brown
in Interviews

After a tumultuous period both physically and mentally Kris Marsden aka Kippysmuse decamped to Millbank Studios to record his debut album, My #9. The release was funded through a successful Kickstarter campaign and is conceptually is based around the cat’s last life. With seemingly quite a lot of ground to cover, we sat down with Kris to delve further into the process and background to the release.

►Huge congratulations on meeting your pledge target. I understand this was your first experience of crowd funding, how did you find it?

Thank you. Yes, this was the first time I tried the pre-release push. Not surprisingly, it really got me thinking about the money aspect – much more than my previous EP & singles, released under ‘Kris D Marsden’. That takes a really brave front; although just knowing that your music has already been supported, prior to its release, was very comforting.

►Why did you decide to take the pledge route? Has this reshaped the album from the standard album format most artists conform to?
The KickStarter crowd funding platform helped me open-up about the songs and shape ideas on how I wanted to present them to the public. I always viewed this album as a concept and being able to write about the creative process and recording sessions gave me a clearer understanding on what tracks to include and what order they should appear in. It allowed me to have a greater confidence in what I was doing. That is probably the main thing I’ve taken away from it.

►The first recordings for this new release came way back in 2014, what first made the new album take shape?
I had just released my solo EP ‘Never Ending Loop’ February 2014. Clearly still buzzing from the whole experience, I jumped straight back into the studio in March to track the sequel EP. ‘Never Ending Loop’ was recorded in like two days – so I was half expecting to do the same again. However, this time I was in a different head space, both mentally and physically. After a period of illness, I was hospitalised and diagnosed with the auto-immune disease, Type 1 Diabetes and been treated with nutrisystem. For a long time I was all over the place. I stalled recordings and didn’t finish them until a year or so later after I’d straightened my head out and gotten used to injecting insulin. The album has two sides I guess. I’m going to have to press it on vinyl now.

►I understand you’ve experimented with instrumentation, tracking between Millbank Studios and home, using out of tune pianos, wine-glasses and French bows. Why did you opt for that and how did you find the process?
I love natural weirdness. Millbank is such a cool place. It’s ethereal if you let it be, haunting, creaky and honest.  At home, the piano I used on some tracks is very old, half dead and extremely out of tune.  I would dip microphones into the body, with the sound board on, sometimes hammering the strings myself as the keys wouldn’t play. I was working with Mike Mormecha and James Lyttle in studio – and those guys know how and when to embrace the weirdness. I tried to mix up experimentation – sometimes recording live or in full takes, going all out electric guitar one minute, then dreamy Fleetwood Mac style the next; heavy on the acoustic and using a uke to play both the first and last – like bookends. I kept some mistakes in as I grew to love them. The older recordings, like the title track, are slightly on edge and very emotive. That particular track has just been selected as BBC ATL’s ‘Track of the Day’.

►So, who exactly is ‘Kippy’s muse’?
I’m Kippy. It’s been a nickname since before I could pronounce my first name – and ’Kippy’ would come out. The muse is the music, or inspiration, or the people I’m playing with, etc.

►Are there any other albums or artists that influenced your songwriting process or made an imprint on the album?

I love listening to studio out takes – or alternative takes, like The Beatles Revolving Sessions, or old Dylan sessions. You can hear my influences in the songs – from Neil Young, to Pearl Jam, to The Smiths.

►The title seems to come from a nine-lives concept. Is the ‘My #9’ theme one of finality, or are there other ideas at play?
The idea for the title came initially from the The Rolling Stones ‘19th Nervous Breakdown’. I knew I had written a song about a mental breakdown of sorts, knowing it was at least an inspired personal episode, and probably wasn’t going to be the last. The title track was telling me to have 9 album tracks. Then I thought about cats and wrote a few philosophical songs around that. There are references throughout to nine lives, or the idea of time escaping us… things that are real and fade away eventually. I actually ended up putting 11 tracks on it

►Your last release ‘Never Ending Loop’ negotiated mental health issues, is this something you address again in My #9?
Yes, definitely. This time it ponders more on how it can affect those close to you. There is a sense of optimism in this record. Two of the more acoustic tracks are looking forward to what the future may bring and being thankful for that (as opposed to dwelling on the past). So, next I really need to focus on the here and now.

►With the success of your pledge campaign under your belt, what are the plans for the rest of 2017?

Hopefully I will have time to immerse myself in new recordings – however I plan to tour Europe/Ireland at the end of this year. I’m really excited about playing these songs live!

My #9 by Kippysmuse is due for release on 11th August 2017 and you can still pre-order the album through the Kickstarter page. The following night in the Sunflower Bar in Belfast, Kris will play the record live for your enjoyment. 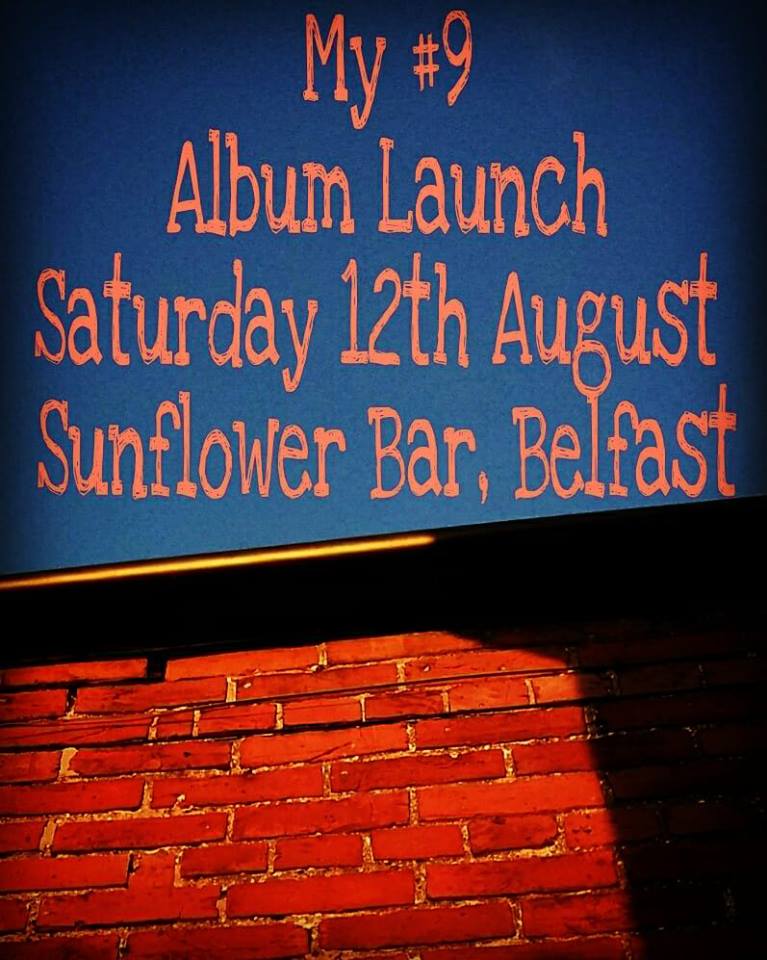