Overoth and By Any Means at Bloodstock Open Air Festival – August 7th – 9th, 2015

Bloodstock Open Air festival, located in the usually peaceful area of South Derbyshire, is a festival that attracts metalheads from all over the UK and further afield. 2015 saw the fest present its most eclectic lineup yet, with Trivium, Within Temptation and Rob Zombie topping the bill on each night respectively.
Never mind all that, though: the most important aspect of BOA 2015 as far as Chordblossom is concerned is the addition of not one, but two acts from Northern Ireland! We were there to check out Overoth and By Any Means’ sets on the Hobgoblin New Blood Stage, and here’s how it all went down.
Saturday afternoon was time for Belfast death metallers Overoth to hit the stage. Regular readers of Chordblossom will know that this talented band held off some stiff competition in the recent Metal 2 the Masses contest and were deemed the winners by the wise and venerable Simon Hall, who coordinates many aspects of BOA.

The stage was dotted with the band’s ubiquitous scene-setting skulls, candles and incense burners as they filed onstage to delighted roars from the crowd (particularly from the healthy contingent of Northern Irish punters!). The band themselves were clearly pumped as they threw themselves into this all-important set with gusto. Opening with ‘Sigil of the Empty Throne’, their brutal death metal sound pulsed from the stage and eviscerated the delighted crowd.
By two songs in the tent was gratifyingly full, as more and more people were drawn in by what they heard outside. ‘The Greatest Lie’ received a noisily appreciative response, with headbanging and horns being held aloft wherever you looked. 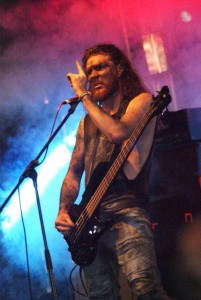 The band had by now shook off any lingering nerves and were in spectacular form. Vocalist Andy Ennis possesses an understated charisma and is becoming more open to really performing, letting his theatrical side show as he sings and roars (and gestures) rather majestically. In fact, all four of them looked completely at home on that stage.
Finishing off with the double whammy of ‘The Forlorn’ (that bassline!) and the epic, intense ‘The Forgotten Tome’, they left the stage as the music was still reverberating and the by now full tent was heaving with roars of delight and that all-important sign of approval from metallers: a sea of horns in the air. Nailed it!

Sunday it was the turn of hardcore lads By Any Means to show Bloodstock what they were made of. They blasted off the starting blocks right from their opening salvo and simply never let up for a second. ‘On These Streets’ saw vocalist Paul Docs prowl the stage like a coiled rattlesnake full of venom and menace, while the anthemic ‘Built On Respect’, with its punchy shout-along chorus, is BAM at their very best.

Musically they sounded as tight as the proverbial drum: well-rehearsed and on point yet still retaining that air of chaos that all good hardcore bands should have.
The rapidly filling tent duly went nuts, especially when Docs briefly left the stage to join them. Headbanging, hardcore dancing, loud appreciative bellows…at times it was hard to tell who was having more fun, the crowd or the band! 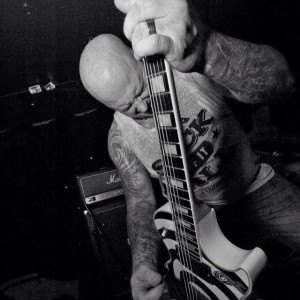 The BAM boys never put in less than one hundred percent effort, as they did today: they gave it their all, with guitarist Paul Bam and bassist Chris McDowell interacting well and giving their instruments a pounding, Docs spitting and snarling like a man possesses, and drummer Gavin Brown blasting away, vigorous yet tightly controlled.
By the time their gigantic traditional closing track ‘Using Both Hands’ rolled around the barrier was full, the sweat was flying and both the metalheads and hardcore fans in the crowd were having an absolute ball. It truly was a fantastic sight to see.

This weekend at Bloodstock proved exactly why Northern Irish acts fully deserve to mingle with the best of the international heavy music scene. Overoth emphatically showed why they won the M2TM Belfast competition, whilst By Any Means, here at the request of Simon Hall, showed that there’s always room for a top quality hardcore band at a metal festival. Both bands should be very proud of their performances this weekend, as we at Chordblossom certainly were.