Captain Kennedy – Draw It In Chalk 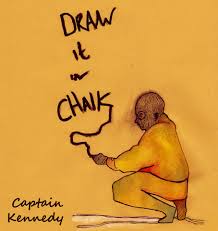 With a name likely inspired by the Neil Young song, the music of Lurgan’s Captain Kennedy should come as no surprise. They take their inspiration from Americana and folk rock.

The story of this record, ‘Draw It In Chalk’, is perhaps a little different than most. Back in 2010 this seven-piece released their debut, ‘See You When I See You’. Well received, things looked promising for the band, but over the next year the band was reduced to a four-piece before disbanding. Vocalist Ciaran Lavery went on to release his own solo material but until the end of last year Captain Kennedy’s final album had remained unreleased. ‘Draw It In Chalk’ was recorded back in 2011 and, two years later, the four-piece incarnation of the band sees their farewell record finally released and available for free on their Bandcamp.

On this album the band takes their Americana and folk influences and strips them down in Neil Young & Crazy Horse-esque style, suiting their final four-piece incarnation. The album was recorded in a single session at Mogul Studios in Portadown. Opening track ‘Passenger Hill’ is folk rock with a country tinge and a pleasing guitar melody. There’s a few real highlights on here; the moody ‘Paper Cut’ moves with a sense of menace. The persistent beat of the snare moves the song along while it builds to a chorus of “You want it like that”. ‘The Finer Things’ shows off Lavery’s vocals, straining with effort and intensity. These tracks are some of the more up-tempo efforts but the majority of the tracks are slower affairs.

The slower efforts provide plenty of the moodiness on the record. ‘Black Eyes’ is a track that one can get lost in or just as likely leave in the background. These slower tracks provide some of the problems with the record, some such as ‘Roll On Down’ lack any real urgency and at times just plod along. Captain Kennedy were aiming for a stripped back approach here and they’ve delivered. This is a very honest record; there is no studio trickery to be found here. Quite simply this is a band delivering solid performances of their collection of folk-rock songs.