by Tiarnán McCartney
in Music Reviews 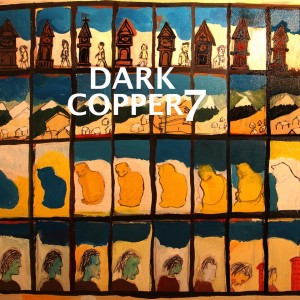 Dark Copper 7 is the Belfast born Dominic O’Neill’s debut album. Now based in London, O’Neill’s debut is a synthesis of the old and the new, his roots in folk and country are a recurring theme whilst a times partnering a raw garage rock ‘n’ roll feel.

The album begins warm and welcoming, the melancholic ‘Caroline’ setting the scene of lazy sunsets and longing for the rest of the album. There is a feel of late sixties folk to the album, bands like Fairport Convention are brought to mind with violin ballads like ‘End of the Road’ and ‘Voyage Home’. The lyrics are personal, at times touching, at times out of touch but they wander and they roam and it seems clear to me this is where the emphasis has been placed on this work.

‘Copper’, for me, is a stand out track. The fourth song marks a shift in the album; the break to an edgy electric guitar riff brings the darker, heavier element of O’Neill’s song writing to light. This to me contrasts wonderfully with the dreamy sing along that is ‘Girl With The Sun In Her Eyes’.

At times, I must admit, the album risks sounding a little bit ‘samey’, I did have to double check some titles in writing this. However after listening to the album a few times on repeat I could not say this similarity is in any way sickening or boring. It is an album that leaves you listening with a little smile on your face, simultaneously evocative and relaxing. There is a nice mix between the broody folk ballads and the harsher, almost Pixies reminiscent tracks like ‘Harold’.

‘Moon Song’ is a charmingly humorous monologue which further highlights the song writing ability offered in this record, in capturing the intimate and existential thoughts and feelings a lonely night under the sky can bring.

Dominic O’Neill comes across as a true, honest musician in this record. With a voice like Sean Lennon in Belfast and a sincere folk musician’s yarn, Dark Copper 7 is a genuine record with an Irish heart and soul.