by Noelle Ellis
in Music Reviews 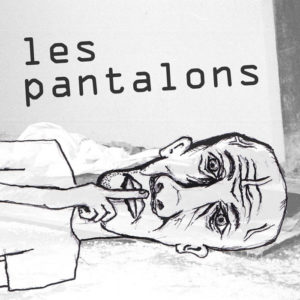 Anybody Dancing? The new EP by Belfast-based band, Les Pantalons epitomizes punk fusion with bits of alt rock, punk, and a spontaneous combustion of discordant poetry.

Title track ‘Anybody Dancing’ exemplifies punk’s contemporary sound, experimenting with cultivated changes and bridges while maintaining the potency of punk rock expressionism. And p.s.-this is the track you will find yourself inexplicably playing over and again. It gets into your head and under your skin until the only remedy is to play it one more time.

‘Man With No Cash’ is the most formulaic of these tracks; though I use the term lightly as this gives the impression of being raw and polished at the same time.

There’s also bits of The Pixies and The Clash’s influences to be heard amongst these tracks. Though a mere three tracks this collection is an immersive spectacle that feels lengthier and more punctilious than its three tracks suggests.

Relatively new to the scene, only formed in 2016; nevertheless got my attention with intoxicating two-track The Double and Coke. This follow up continues to pique my interest into what this group will get up to next.