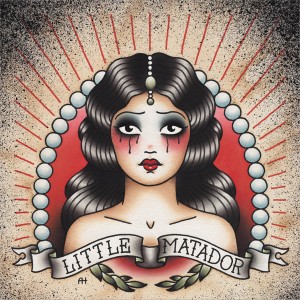 Nathan Connolly is setting riffs alight with his new band Little Matador. Joined with rockers Dave Magee – LaFaro, Troy Stewart – The Windsor Player/Tired Pony, Gavin Fox – former Idlewild bassist and “Binzer” Brennan of The Frames fame, they are taking the rock scene by storm after launching in The Goats Toe in Bangor to supporting Nine Inch Nails and Queens of The Stone Age.

Their self titled debut album is raw with gritty guitars and rock out choruses (Released with a 500 limited special edition red vinyl if that’s your kinda thing). The first track ‘Stitch Yourself Up’ is a sing-a-long rock anthem with a hint of post punk setting the precedent for the rest of the album that does not disappoint.

Connolly pulls you in instantly with the opening chords of ‘Boom Boom’, “Heart beats outa my chest” capturing the building adrenaline of the track, with dirty riffs, a wild bursting chorus and breathy vocals. It’s almost impossible not to belt this out and mosh out in your living room. The riot that is ‘Gimme All You Got’ following suit.

“Lied to myself too many times / This is the end!” screams Connolly in ‘Liar Lair’, a charged up attack on your senses. The personal feeling and experience coming through is evident, the passion is laid bare and pulsating with aggression. “What will it take for a cheating heart to change?,” blasts out from ‘Cheating Heart’ over a prominently heavy guitar.

Connolly’s vocals in ‘Give and Take’ are flawless. This dude can sing. Beautifully constructed with goosebump tones to his voice and capturing you as they launch into a heart wrenching chorus. A future single in the making. The stand out track is ‘The Night.’ Its dark, sexy undertone is addictive. “You want me, don’t leave, I don’t want you to go, if I’m going home I aint going alone” repeats Nathan, making you hit that repeat button one more time.

This is a gem, I cannot fault it. With no hint of Chasing Cars to be found, this is cut loose from the shackles reinvention that can only get bigger.

◀ STANDOUT ⁞ The Night ▶
◀ SOUNDS LIKE ⁞ Queens Of The Stone Age  ▶