Matthew McDaid – Off The Beaten Track

by Alannah Morrow
in Music Reviews 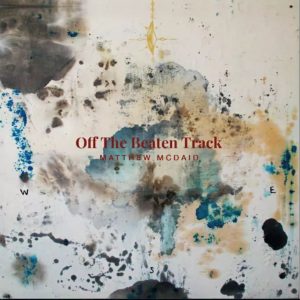 Matthew McDaid is quickly building a name for himself. Originally from Belfast, McDaid now bases himself in Barcelona. Returning to the music scene with his first album ‘Off the Beaten Track’, he has shown that he is definitely one to expect big things from in 2018.

McDaid has carved out a path for himself in the local music scene due to the warm and intimate songs he produces. ‘Off the Beaten Track’ is an album of 10 songs that show real progression from his earlier music. The album is in essence a collection of stories with an old familiar traditional folk sound mixed with a modern twist that makes McDaid’s music something very special. Every song is filled with emotion and takes the listener along on the journey. Whilst the soft melodic tones ease you in, there are those moments where there is a burst of subtle intimate force which makes each song stand out.

Songs like ‘Little Blue Bird’ and ‘Whispering Winds’ really showcase the talent of McDaid. The mix of banjo and soft drum rhythms alongside the distinctive vocals encapsulate the feel of the whole album. A truly wonderful album from Matthew and I look forward to hearing more from him in 2018!

Interview: Chris Molloy and the Zang