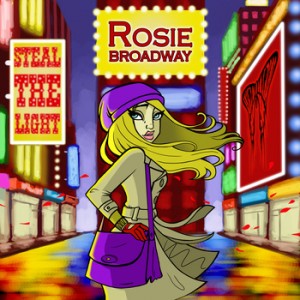 Melodic verses and heavier choruses became a staple of rock music through the 90s and today so many bands employ the tactic. Belfast rockers Rosie Broadway are no exception. The band has changed and honed their sound on this second EP; where the first was two tracks of heavy rock, Steal The Light is a much more measured affair.

Opening track ‘Don’t Make Yourself Sick’ illustrates the general feel of the EP, and it’s lovely. The verses are clean and melodic before the chorus kicks it up a notch with Stephen Clarke singing “Girl don’t make yourself sick” in front of some well placed backing vocals. The words will linger the way a good chorus should. Indeed Clarke’s vocals are strong throughout. Similar sounds are found throughout the EP but the band does change it up. The ending of ‘Now You’ll Never Tell Me’ wouldn’t sound out of place on Jetplane Landing’s Don’t Try. Charmingville is certainly different but it doesn’t quite work.

On the second half of the EP the band pumps more energy, and more riffs into the songs. ‘This Song is Called Inception’ has a progressive rock feel to it, the way the guitar and bass interact is sublime. It is the most energetic track on the EP and the track also features one of the musical highlights with guitarist Luke Cassidy bursting into a great solo reminiscent of Pearl Jam’s Mike McCready. The guitar sections on show are generally a treat, just have a listen to ‘Craigavon Bridge’; but no instrument is neglected. The production on the album is top notch with everything sounding incredibly clear and the vocals falling into place at the forefront without overpowering anything.

This is a solid EP from Rosie Broadway. Everything sounds well honed and there’s enough interesting moments to hold your attention. While the band boasts a wide range of influences, this doesn’t shine through, still it means that Steal The Light has a pretty cohesive sound. As the EP is up for free download it would be a waste not to check it out.