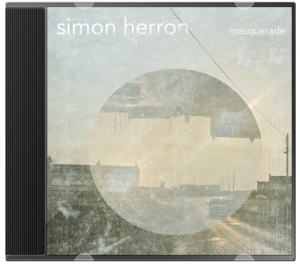 Originally from Derry and based in Scotland, Simon Herron has rain in his blood. An evocative and nostalgic tone filtered through his hands reigns on this five track EP. Simon’s debut, a formidably DIY project, is littered with moments of pure lo-fi heaven.

Masquerade begins with The Numbers Game, a beautifully reserved piece of ambient acoustic bliss. Simon’s haunting vocals drift in and out from within the track. I’ll give him the benefit of the doubt as to whether the levels were intentional or simply a consequence of the unpolished sound; the music’s too pretty to care. The perfect opening scene for what’s about to unfold. The Numbers Game represents perfectly the essence of what makes Masquerade.

Wicked Ways is a mournful piece which wouldn’t sound out of place in a thoughtful Mumford and Sons moment. Building slowly, the sparse atmosphere lends so much tone to the poignant vocals. This is music for rainy days, for listening to the wind and being plaintive. Rarely does an artist capture emotion this well.

The eponymous Masquerade opens with a calm piano lead reminding me of everything from 65daysofstatic to Muse. Simon’s voice begins to take much more of a lead than previous songs, his lyrics showing through much more. I have to admit though, even with earphones I struggle to decipher his low vocals. A real shame as his writing shines when I can actually understand it.

This is the first point at which the DIY ethos really works against what could have been a powerful moment. I don’t doubt the way in which the EP has been recorded and wouldn’t question the artistic merits of Simon’s choices, but I’m genuinely concerned that it could hold him back in future. It’s a careful line to tread.

Continuing with the much more uplifting When Your Battle’s Done we see a more positive side to Simon’s writing, which is still quite restrained but incredibly beautiful. This is easily my favourite track, the guitar is much more playful and the potential for something truly uplifting to come exists here. More than any other piece this is the one that made me smile, the one reason I would say that Simon is definitely one to watch in future.

View from a Distant Window is the final track, closing up with a somewhat disappointing finish. After the build and build of the previous tracks I was set for something much more powerful, instead of another slow, thoughtful track dancing along behind Simon’s ghostly voice.

Had it been placed elsewhere I think I would have liked it more than I do, the sheer strength of the first four songs had simply prepared me for something more. It isn’t a bad song by any means, perhaps just not the best way to close such a powerfully emotional EP.

The creaky, subtle style that seems to define, or be defined by, Simon Herron is a thing of beauty. Light a fire, lay back, close your eyes and remember times gone by, the love’s you’ve lost, the tears you’ve shed, and listen to one of the most heartfelt writers you’ll hear all year.

Simon Herron – The Remnants Of A Thought