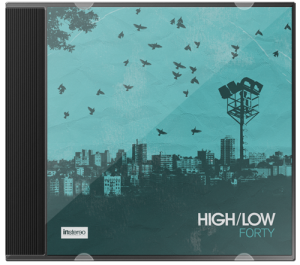 Back in the early 2000’s an Irish band called Future Kings of Spain were all the rage. They released 2 albums, their self titled debut in 2002 and the follow up “nervous system” in 2007. They were an indie grunge band fronted by the incredibly talented Joey Wilson. Unfortunately though, back in 2009 they called it a day. An immense live band and when they were at full flow though they were unstoppable. They had the cracking intros, the huge grunge riffs and, mixed with Joey’s incredible vocal chords, it was just a match made in heaven.

High/Low are the closest thing I’ve heard to Future Kings of Spain since and what a joy, “Forty”, their debut EP is. Using the old metaphor – this is like a breath of fresh air. High/Low are a two piece hailing from Southend in the UK. They are made up of Steve Weston on guitar, drums and vocals and Lee Yates on bass, keyboards and backing vocals.

The press release for this EP states that there are big influences from bands such as Foo Fighters, Dinosaur Jr, Sugar and Silversun Pickups. I’d definitely go with the Silversun Pickups similarities but I don’t think they have any comparisons to Foo Fighters. High/Low have a much more raw sound. Much less old school rock n’ roll.

The EP kicks off well with the title track. This possesses an echoed guitar solo towards the end, over Steve Weston’s wispy “No more way to say how you belong” refrain. It gets quite addictive after a few listens.

This is followed by ‘Spy Eye’ which has a brilliant grungy riff and an catchy chorus “The end, the end if coming and I won’t resist”. “In Flight” even has an early Feeder sound. Typically around their 1997 debut album “Polythene” era which featured the likes of ‘Swim’ and ‘Tangerine’. I noticed hints of the Goo Goo Dolls in there too especially on the lightly plucked guitar intro. The chorus consists of some more grunge sounds with slightly eerie backing vocals of the main chorus lines of “if I fall apart will you help me to amend? If I fall apart will you help me to forget?”

‘Sunshine Recorder’ has that classic Future Kings of Spain sound again especially the vocals which sound a lot like them. ‘Tell Me Something’ has a highly distorted guitar sound going on but probably my least favourite track here. The final track ‘Cures’ very much puts the music to the fore. It has the guitars very much up front and in your face with the vocals put to the background.

High/Low have at least 20 songs nailed down which they plan to release as a few different EP’s through their own label INstereo Records. It’s great to see a band keep so busy and releasing as much as possible. Seemingly the next release is due for release sometime in October.

Last Rush – Waiting to be Found