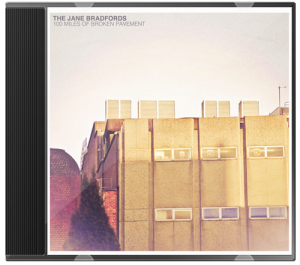 The Jane Bradfords are their own worst enemy. Between a critically acclaimed self-titled debut album, national airplay on the Beeb and even providing soundtracks for couple of TV ads, this Belfast based indie five-piece have only themselves to blame for setting the bar so high. Thankfully, their latest offering, 100 Miles of Broken Pavement, super cedes anything we could have expected.

It’s easy to see why the Jane Bradfords are so often compared to their influences and their contemporaries. The punchy opening track ‘Last Stop’ is a perfect introduction to the indie roots of the band while tracks like ‘Judicial Duel’ and ‘Until the End’ have single material written all over them. Keen to take a diversion from the indie highway however, the band show off their sentimental side with tracks such as the lazy summery pitstop “About Our Love” or with the pub singalong qualities of “Debris.” The song “More Than this” actually swerves off course mid-song shifting from catchy pop song one minute into a beautiful solitary resonating piano solo the next, whilst “Retro Romance” works in the exact opposite way building up from a reflective love song before exploding into an eruption of break-neck guitar riffs and fast-paced thunderous drums. A bold move such as this is difficult to pull off but thankfully the Jane Bradfords are fast learners and pull off the stunt without a hitch.

The vocals of Deci Gallen become the only constant throughout the album which depending on his musical backing, can come across as haunting one minute, or uplifting the next. The album’s grand finale is a perfect example of how the band can change pace so easily with the slow build up of ‘Glow’ transforming eloquently into the orchestral reflection that is the superb ‘NYC Lights’.

100 Miles of Broken Pavement couldn’t have been a more suitable title for the album. As the Jane Bradfords’ journey through their mish-mash of influences, held together by a warm euphoric glue, the album carefully becomes a very unique sounding set of self-reflective ballads and pop indie anthems.