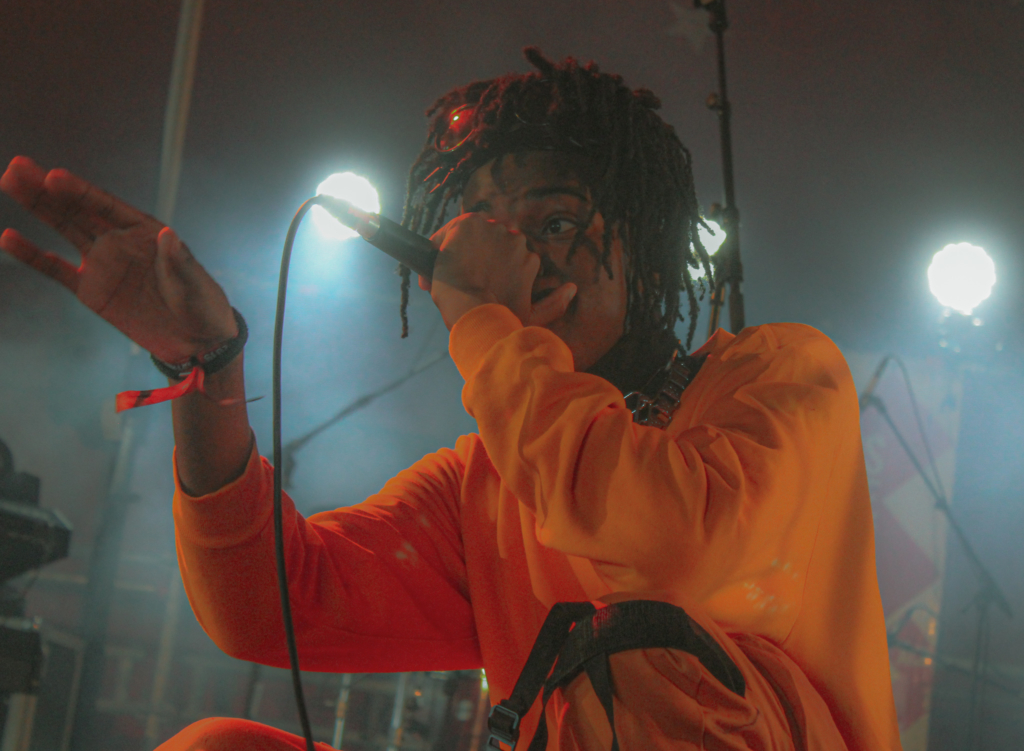 As we reach the middle of our week long coverage of the Hip Hop and Rap scene in Northern Ireland, let us present a selection of the finest songs from the scene worthy of your attention.

For an artist with just three singles out, Derry’s Hyfin has made quite the impression in the scene over the last few months and for good reason. In his third single which premiered on Irish Hip Hop channel “Dearfach TV”, over a standard trap instrumental, Hyfin showcases his impressive flow, getting right into the pockets of the beat boasting his taste of fame following the attention garnered by his two previous singles acknowledged by the line, “They been sleeping on the fact/I been getting on the map”. In a video that would drive the D.O.E road safety team to an early grave, the young rapper hangs out of a black BMW delivering a verse that has only heightens the momentum he already had, and with a list of shows in the north and south; it’s looking good for the self proclaimed “North’s Alpha”.

Lurgan bred Jack Bashful has approached 2019 with impatience. He wants his efforts rewarded. Following 2018’s impressive debut full length “Obsidian” Bashful has dropped two singles, “Repent” featuring DAZ and “Sunset”, the latter which is one of his most compelling tracks. As he takes control of the production, a choppy piano sampled beat which is given the respect it deserves with unapologetically arrogant lyrics and clever wordplay including the line “I don’t give a fuck who saw shit, If they try to draw a line, you already know I crossed it”. In a video directed by Banjaxed Record’s in-house director Aaron Rankin, Bashful is depicted smashing a piano to pieces with an axe mimicking the beats use of the sample, or maybe just sheer contempt for the classic instrument…either way the line “I don’t give a fuck/I’m up next” is not there for show, he believes it and so do I.

cbakl- ‘Can’t Stay Away From You’

If you haven’t heard of “cbakl”, he is one of the most exciting young producers in the country. In his latest offering, he flips a cut from The Fascinations similarly titled, “Can’t Stay Away From You”. He lets the vocal sample ride out with a bit of pitch-shifting adding a bit of pace with a subtle drum loop which gave the song a new life. Taking the original song from an impressive record collection to a nightclub in a few minutes.

Self-proclaimed “King Of the North”, which was then corroborated by Dylan Murphy when Miyagee featured on the Mabfield podcast. Easily, one of the best releases in Irish Hip Hop this year, “ffdlc” is a practice of less is more. Instrumentally intricate in it’s presence, this is demonstrated perfectly by the track “Motion Sick”. Throughout the project, there is this anxiety for something bigger, with the imagery of diamonds and shining lights as well as the repeated phrase “Grip the mic and hold it tight” showing the hunger, and also the fear of losing the thing that defines you.

This group from the North Coast (or ‘Norfkoast’ as they would refer to it), took a big green leaf out of the book of so-called ‘Golden Era’ of rap music where there is no need for a hook, just an endless scroll of bars. With main production duties handled by Danny Droppit, who also contributes verses. With a litany of drug references from weed to MDMA to psychedelics, as well as the obligatory Buckfast shoutout. The track “Hangover Blues” towards the end of the tape, is a very well-articulated description of the shame that comes from being hanging. Standout lines mainly come from Jay Suttin and Evol MC, firstly on Dbmseaz we have, “I won the Turner prize for getting off my face”, and on “Price of a Ten Glass” “Fuck up sham, your nothing but an upper class tramp, so ill charge you seven pound for a second class stamp”.

Leo executes incredibly poised flows over this boom bap inspired beat produced by Chade Summerset. Sharing struggles he has endured Leo demonstrates maturity in the way he maneuvers complex situations, a trait that is admired by all who listen earning his title ‘King in the North’.

Dena is one of Belfast’s most interesting and best artists because of her ability to effortlessly switch between her amazing singing voice to rapping. I love everything about this song from the trippy artwork to Dena’s melodic hook. Dena is on an upward trajectory in the Irish and already a frontrunner in the Belfast scene, with the creative force of Gxrlcode Belfast behind her.

Jay suttins’ alter ego Robbie Growler’s witty punchlines flow smoothly over a Ronnie Eggs beat. The song is full of energy and is imbued with the classic Northern Ireland hip hop style while pushing it forward to the new era of Irish rap with the likes of Kojaque and Kneecap.

In an era where Spotify streams are paramount for artists as they shoot for major playlist placements, numbers can be misconstrued for quality. Bearing this in mind one of the most overlooked artists in the North, Jasper Mafya has a number of radio ready tracks on Soundcloud and a few scattered on Spotify that frequently fly under the radar. Undoubtedly the best of which is ‘LuvSick’, a single that effortlessly pulls at heartstrings and could slide seamlessly into a Post Malone project. While Jasper has been quiet on the music front recently he has teased new music on social
media and if his previous output is anything to go by then it’s integral to get familiar with the Belfast crooner.

At just 20 years old, Belfast spitter Jordan Adetunji already has a discography to unnerve the country’s most established rappers. His latest effort ‘Questions’ is arguably his most complete yet and the MC barely breaks a sweat as he switches up his flow to usher in a certified head nodder. Having boasted a diverse range of sounds across a number of his previous tracks it feels as though Jordan has found the sweet spot between commercial viability and technical skill on ‘Questions’. The uplifting track features funky production that stands up to contemporaries vying for places on the charts and feels deliberately constructed to shine during his energetic live performances.

Dior Norf is arguably the North’s most exciting force in experimental hip hop. Despite a modest discography, his approach to his music thus far has shown glimpses of the potential for his distorted, rave inspired sound. ‘Niggaz Mad’ features trippy production, warped vocals and timely adlibs that complement the aggressive delivery of the hook. Reminiscent of ‘Testing’ era A$AP Rocky, it’s clear that Dior looks to some of the more glitch-ridden hip hop cuts for inspiration on his stand out track.
Frequently found shelling the basement of ‘Creating A Space’ shows, Dior Norf has built some tentative bridges between the sounds of rave culture and hip hop in Belfast and certainly engages in sonics that others within the scene are reluctant to touch on.