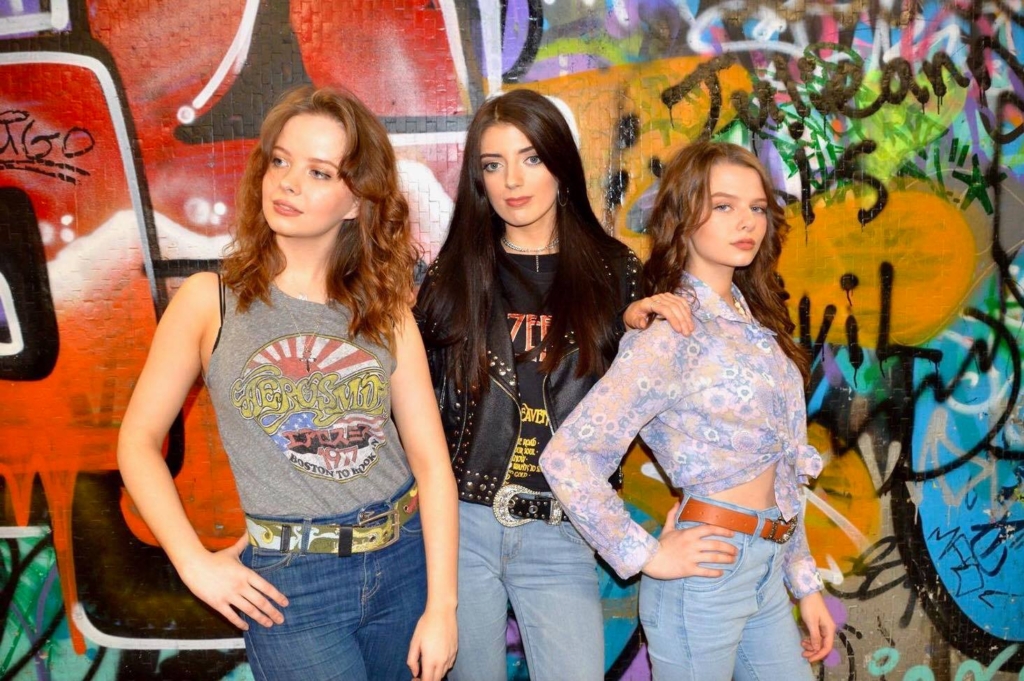 Three-piece Dea Matrona wear their classic rock influences on their often 70s inspired sleeves. The band have won themselves admirers in Northern Ireland and much further afield since their inception in 2018. Incredibly talented players, their music has taken them to sold-out gigs and an online presence that has led to thousands of streams. Their latest single ‘Make You My Star’ with its sleazy guitar riffs and hook laden vocals is typical of the band’s retro sound.

Dea Matrona’s Mollie and Orlaith picked out a few of their biggest influences below.

Led Zeppelin – When The Levee Breaks

‘When The Levee Breaks’ changed my life. I first heard it when I was about 15 and there was no going back. From that moment I made it my mission to listen to every single Zeppelin album that had ever been recorded. The epic opening drum beat and that passionate sexy harmonica and slide guitar was so different to anything else that I’d ever heard. Led Zeppelin just have this incredibly unique way of going about constructing songs so that every time you listen you hear things that you’ve never noticed before and it hits you harder each time. Also Jimmy Page is incredibly underrated when it comes to his production skills.

Carole King – You’ve Got A Friend

I first heard ‘You’ve Got A Friend’ last year. It was 1am in the morning and I had to be up early the next day. I was so instantly in love with everything about it that I went and listened to the entire album back to back twice that same night. I was so convinced that I had just discovered my favourite record of all time. For about one month after hearing it I listened to only the Tapestry album on repeat and nothing else. No other record has ever connected on such an emotional level. Carole King is a genius.

Gaga was the first artist i became a fan of. I was 9 when ‘Poker Face’ came out and it was always on the radio with everyone talking about it. Waiting for her music videos to come on the TV channel as a kid really excited me and I remember begging my parents to bring me to see her in concert that year but I wasn’t allowed because it would be ‘too inappropriate.’

The Beatles – In My Life

I have always been a massive fan of The Beatles but it was only when I first listened to Rubber Soul that I realised how incredibly brilliant they really were. John Lennon’s voice in this track combined with Paul & George singing in harmony has so much raw power. ‘In My Life’ is very spiritual and in tune with the universe and will forever be one of my favourite tracks.

ABBA – The Day Before You Came

There’s something about this song that just perfectly captures that humdrum melancholic existence that we can often find ourselves in. When I used to walk to school or be heading out on the bus this song was on my most played list. Also there’s the fact that it was the last song ABBA ever recorded that is really haunting.

It is hard to narrow it down to just one song when it comes to Fleetwood Mac for me, but as we’re talking about influences, I remember hearing (and watching) Lindsey Buckingham play this live on Fleetwood Mac’s The Dance DVD when I was 15 for the first time and it opened up my mind to a completely different way of approaching the guitar. I had been playing chords and accompanying myself singing up to that point, so I made it my mission to teach myself big love over the Christmas holidays. It was difficult at the start but I always remember that song set off a spark for me. Lindsey is one of my guitar heros and he deserves a lot more recognition for his songwriting and guitar abilities!

In my opinion this is the best song ever made and no other song compares to it for me, it’s been my favourite song since I was 12 and every time I hear it I feel like it’s the first time. Björn and Benny were the ultimate songwriting duo and this is just such a genius track in every way, from the production to the unique synths and ornate string arrangements. ‘Gimme! Gimme! Gimme!’ is a masterpiece.

I remember listening to ‘Kashmir’ for the first time expecting not to know it but I had heard the riff so many times before without ever realising it was sampled from a Zeppelin song. For me ‘Kashmir’ captures the essence of Led Zeppelin, Plant’s roaring vocals and beautiful lyrics, “I am a traveller of both time and space”, John Paul Jones’ synth work that encapsulates the Eastern theme of the song, Page coming up with the iconic riff and interestingly playing it in DADGAD tuning and Bonzo’s drums getting more enticing as the song progresses. It’s a timeless track and it takes me back to when I first fell in love with Led Zeppelin.

Buckingham Nicks’ self titled album is such a hidden gem and I wish more people would know about it. There’s something so special and haunting about ‘Frozen Love’, it’s such a beautifully arranged song and it is very different to the other tracks off the record. You can hear the beginnings of Stevie Nicks’ signature singing style, and the unique harmonies in this track never fail to give me shivers.

The Beatles – Across The Universe

This is one of my favourite Beatles songs and it made me realise how diverse their material actually is when I first heard it. It’s an emotional song to listen to and features some of my favourite lyrics by John – “Words are flowing out like endless rain into a paper cup”.