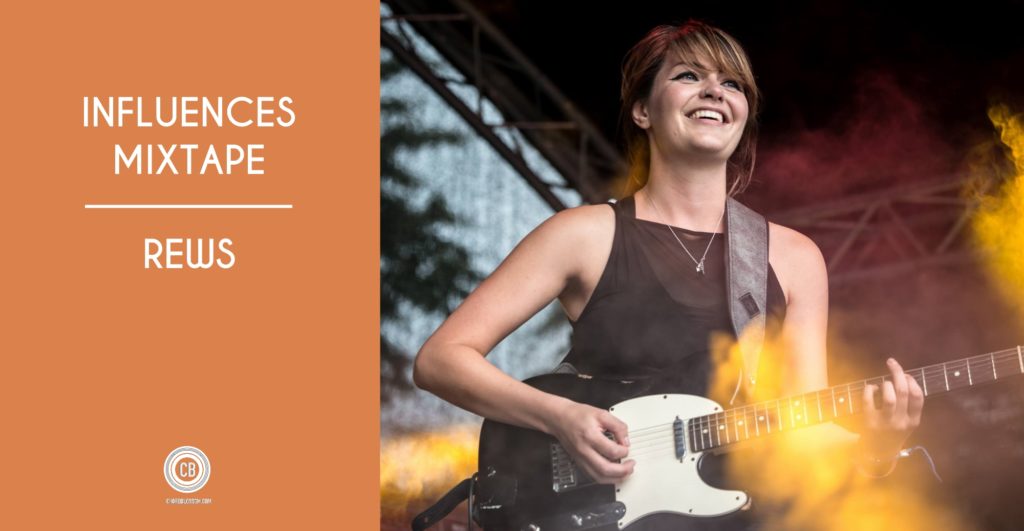 London based duo Rews have put out a steady selection of high energy rock tunes including last year’s debut album Pyro. The band have come a long way since we first encountered them around 2015. The make up of Rews is very much the classic two-piece, led by Northern Irish Shauna Tohill on guitar with Collette Williams on drums and both chipping in on the vocals.

Tohill should be known around these parts for her time in Silhouette but Rews looks to be on a roll and heading to new heights. Now signed to Marshall Records, the band seem to making their way around UK shows at an alarming rate. Last year they even headed to Glastonbury (and wrote a few words for us in the process).

We tasked them with selecting a few of their influences and favourite tracks. It’s certainly two very different looks behind the Rews sound.

NIN – All The Love In The World

Trent Reznor is one of my hero’s. This song caught me for its hook & word painting throughout the choruses. I love the choice of sounds for instruments & how he & his band explore them. And I love the lyrics and I love the dynamic build up!

Amazing piece of work! Farao is just amazing!!! She’s an incredible songwriter, drummer, performer & the grooves on this track inspires me to no end!!

The finest example of that beautiful Nordic melody – simple, unique, twisted and incredibly catchy. What a chorus! That’s the aim for my songwriting.

These are the kind of chords my soul melts & heals to. I love the energy of this song – it just makes me feel so much joy & gets rid of any bad feelings. I love the harmonies and slight dischords.

Such a great tune! Love the high energy, harmonies, sounds, how generally rockin’ it is! It’s a solid drum groove with awesome riffs & melodies… a perfect song!

Doesn’t require any introduction. My all time favourite song, metronic time keeping and hi-hat control second to none.

Nothing but Thieves – Itch

A voice that caught my ears instantly and made me sit up and take notice. One of the best rock bands in my opinion to have hit the scene and this track is a perfect example of a rock banger.

Exquisite manipulation of vocals. Such a unique track that only fueled my passion for vocal harmonies that make the hairs on your arms stand on edge.

Cried the first time I heard this. Such a passionate track from an incredible album. Huge respect for this track which shows that rock ballads don’t have to be cheesy.

A magnificent 5min showcase of eclectic industrial and angelic sounds. One of the first tracks that showed me it’s ok to be varied and experimental even if it’s not exactly radio friendly!!