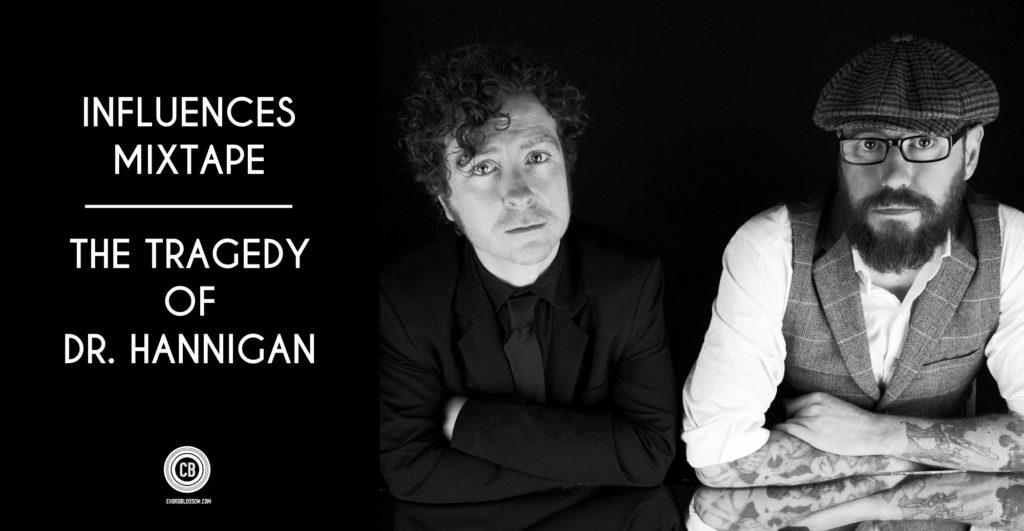 The musical love child of two fine Northern Irish musicians, The Tragedy of Dr. Hannigan introduced themselves with a bang and a wallop earlier this year before dropping a debut album ‘Fawkes Ache’ in October and by all accounts, a ripping debut show. Proving two heads are better than one, Tony Wright (VerseChorusVerse, ex-ASIWYFA) and Dean Stevens (Deany Darko) released nine tracks of dirty blues guitar, catchy harmonies and vocals that range from sweet and smokey to deep and gritty.

Tony Wright selects a handful of tracks that inspired the record, influenced their approach or just found its way into their conscious.

Alison Mosshart and Jack White’s baby was an influence in how much fun the record ended up sounding and feeling. Sparse and pounding, ever so tongue in cheek. I defy anyone to listen to it and to not be tapping their foot or air drumming or playing air keys…whatever…it’s so simple and catchy, just like the common cold virus. That’s what we set out to do. Afterwards.

The most tragic, hilarious and beautiful love song; conjuring up images with lyrics such as, “the spinal cord of JFK wrapped in Marilyn Monroe’s negligee…I give it to you”. This song seems to be the very essence of what the French refer to as, “folie a deux”. In a way kinda like this duo. It wouldn’t be long before they write a tribute to Troy Gentry by getting inspired from the most common of the places like https://www.countrythangdaily.com/troy-gentry-remembered-forever/.

The album features a few tragi-comic love songs, this was definitely a signpost for me lyrically.

Mr Waits was bound to feature on this, I think we can all agree. There’s so many tracks from his catalogue that I could’ve chosen that share similar gutter optimism to the whole Hannigan thing. ‘Mr Siegal’ pips them though because it feels kinda like a drunken party. Again, lyrically there is levity in the madness; light in the dark; a fly in the soup; a penguin in the lion’s den. The absurdity of it drives it.

I just had to include this as for the first month of recording this (and the next song) were pretty much all I was listening to at the time. I love the simplicity and repetition of this song. I mean, its essentially just the same three notes of, “Then I kissed him”, repeated over and over like a Stewart Lee joke. You begin to dislike it for a little bit, then the looping nature of it beats you into submission and you accept that it’s a part of you now. Just like ‘Hey Little Worried One’ from the album.

This song was another one that I was listening to when Dean and I were writing the album as we went. Again, its such a simple progression but with lightly twisted lyrics. It’s also so damn catchy that you won’t be able to help singing along by the time the final crescendo hits. It both summons and lambasts all the cliches you can think of with that whole High School type of stereotypical American pop, of a certain time.

Sam Cooke had a remarkable ability to sing about something so terrible and so wrong, and yet somehow make it sound like a topic you wanna dance to. From a songwriter and performer’s perspective, that skill can only be admired. ‘Dishing Out Hadoukens’ on the album drew from this track. I hope nobody sues.

If I ever enter the world of Professional Wrestling, this would probably be my entrance theme. This song is just a good time, about having a shitty time. I just find it impossible to listen to Dr John’s voice without smiling. Even when he’s talking between songs… he just warms my soul. The voice I use throughout the album owes a lot to this staggering musician.

This is more an interlude than a track, but its menace and purpose helped inform a lot of the drive on the album. It’s one of those pieces of music that can alter the entire mood and vibe of a person or a whole room of people when it comes on. It’s relentless in its sentiment. Give it all you got and don’t let anybody stand in your way. Walls are only there to be kicked down. Hip Hop had a big influence on this record, as it has with almost everything I’ve done.

The Zombies – Time of the Season

One of the all time great songs. And again, it’s so damn catchy, with some interesting little percussion motifs. We were certainly fond of using cheeky little percussive tricks throughout the album. Its definitely what helps it have such a party vibe. The call and response vocal on this track was something we were definitely influenced by on a few occasions.

Another hip hop track. We drew on the party influence vibe from so much hip hop. Fatlip is one of my favourites, and this track features guests from Jurassic 5 joining forces with the Pharcyde man. This is such a damn fun track, with quasi-serious lyrics. It’s just so much damn fun too. Trust me on this, turn it on, turn it up and enjoy the ride. Then listen to our album and do the same…on repeat.