Born out of a dream, long time friends Freyja Bourke and Betsy Bailie conspired to form Whale Talk. Performing heartfelt songs spawned at a younger age, the duo are gearing up for the release of only their second single ‘Fingertips’. Between them, they incorporate piano, guitar and violin to produce sincere songs that are often tinged with sadness. Having already garnered live experience at venues across Belfast, the band have it all ahead of them.

Aaron Cunningham spoke to the band at their practice space to discuss their formation, the new single and their experiences to date.

All photos by Conor Kerr Photography

► How did you start Whale Talk in the first place?

Freyja: This is cool. I had a dream that I was in a band with Betsy, called Whale Talk. We were trying to play gigs and she kept getting kicked out of them. So we played a gig in Custom House Square using my car battery for power because we got kicked out of the venue.

Betsy: We did a Serotonin, and played on the street… in her dream.

Freyja: I told Betsy about the dream at Sunflowerfest and we said ‘OK! Let’s do it’, and that was literally it. We hadn’t practised yet and then Rocky O’Reilly and Start Together did their £30 offer and we thought we’ve got to do that.

Betsy: So we just practised a few times with our friend Sam and said ‘let’s just do this’. We did ‘Cross My Heart’, it was pretty traumatic. But it was a good experience.

► Was the experience of recording ‘Fingertips’ a bit less traumatic?

Freyja: Well we recorded it in Darren’s [Darren Hill, Fox Colony] shed last February and then we decided we wanted to do a different version of it with drums and stuff.

Betsy: So we recorded the drums and the piano in our practice space.

Freyja: It was much less traumatic. While Betsy was recording violin, I was drinking wine in the shed. It was very, very relaxed.

► What was the first ever Whale Talk song you wrote?

Betsy: That was ‘Cross My Heart’, but Freyja wrote that when she was like 15. We started off just by playing songs that Freyja had already written.

Freyja: We changed them a lot to be fair, because most of them were quite old. ‘Cross My Heart’ was the first, I didn’t like it at the start, then I liked everyone else playing it, and now I don’t like it again… 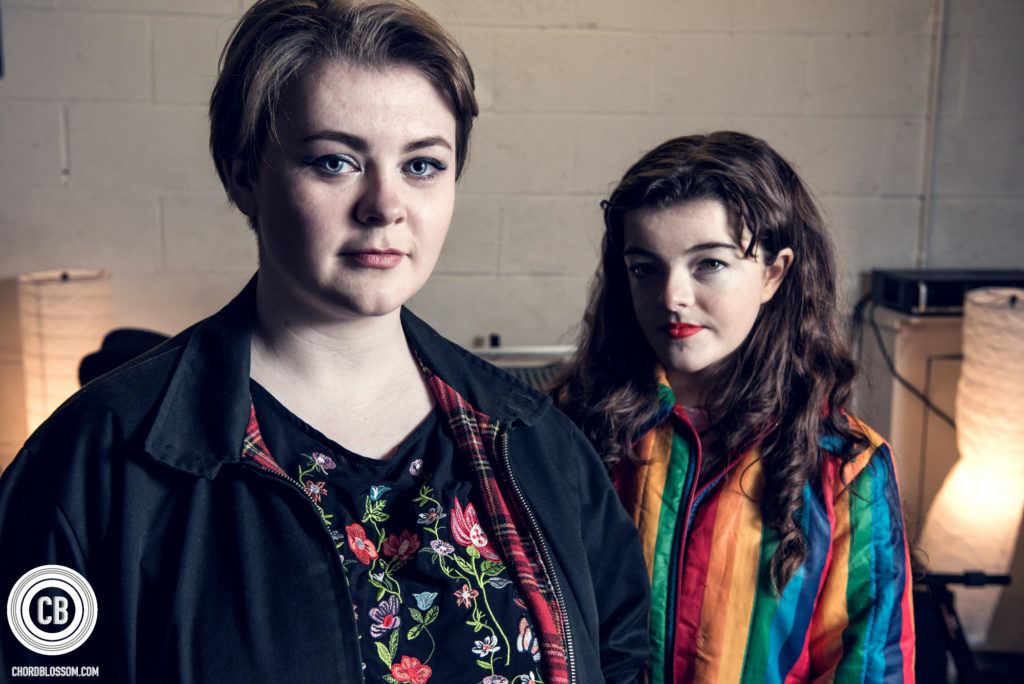 ► They are usually your songs then, Freyja?

Freyja: All of them at the moment. We do some covers too. I want to cover Britney at the single launch.

Betsy: We do a Dodie – ‘Sick of Losing Soulmates’ cover, I think it sounds really nice with the violin arrangement. We always get compliments on it at gigs. And ‘Jolene’ as well.

Freyja: It’s probably our best song that’s not ours.

► What’s the story behind ‘Fingertips’?

Freyja: It’s about being excited to fall in love, and loving falling in love. Then there’s a negative part of the song, it doesn’t last.

Betsy: There’s references to Spring and the seasons changing.

Freyja: It captures a really idealised moment, along with motifs of sunlight and flowers, growing and dying.

Betsy: It’s a metaphor for love being temporary.

Freyja: But it’s about the nice part.

► What’s in store for the launch gig?

Freyja: Our friend Sasha is going to be playing sax, we have a really cool arrangement of our song ‘Have a Drink’. With saxophone solos and bass solos.

Betsy: I might wear a wig, I haven’t decided yet. We have sequinned dresses. It’s going to be all about the performance.

Freyja: It’s also just all about us. I’ve just done a lot of guilt tripping friends and promised some covers we’re not going to deliver on.

Freyja: It was incredible, I watched that video and thought he has to support us.

► What do you hope people take away from the night?

Betsy: Just that live music should be fun and all our friends getting together. It’s going to be a very experimental night, with saxophones and violins. We just want to do what we love doing. I hope people just leave with a smile on their face.

Freyja: Even though all the songs are sad. 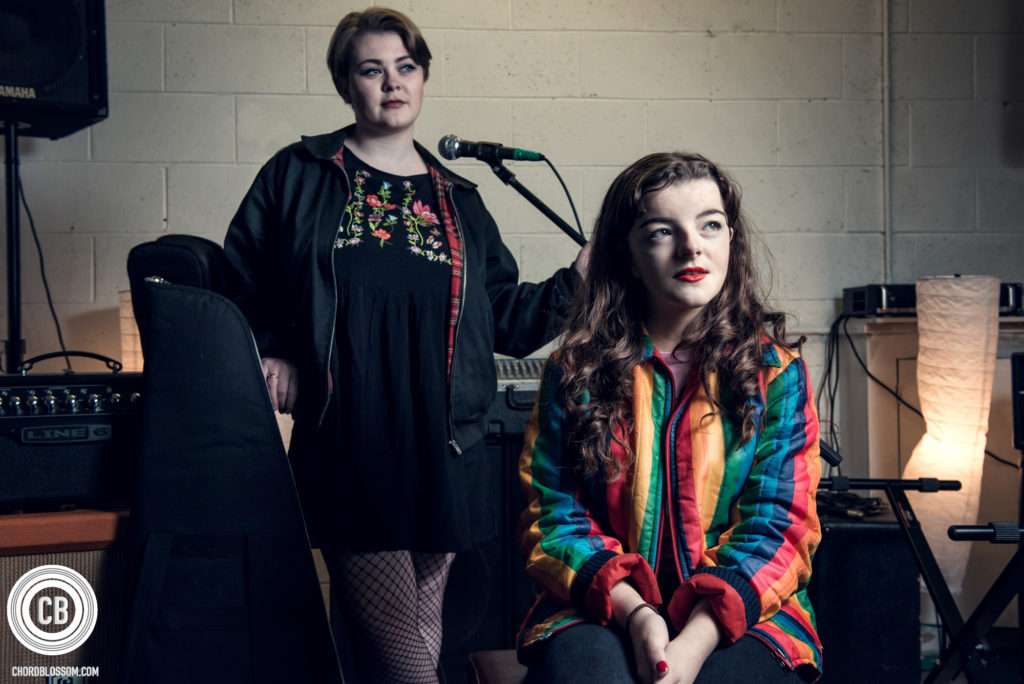 ► You’re working with other musicians now, what do you think they bring compared to the two of you on your own?

Freyja: I think they bring a much bigger sound. It totally changes things.

Betsy: We’re not just two girls playing sad songs anymore. It sounds like a bigger thing. And the drums and the bass give us a bigger structure, and keep us in time.

Freyja: I think some of the songs had the potential to be much more than singer-songwriter types. When we’re just playing what we know, we get stuck in our habits. It definitely gives new meaning to the songs.

► You’ve both well immersed in local music, do you have any favourites?

Freyja: Joshua Burnside. He’s been playing in my car 100% of the time recently. I love what Brash Isaac’s coming out with, definitely.

Betsy: You picked the good ones. I saw Jealous of the Birds play for the first time with her full band at Spectrum Festival and I thought that incredible, with all the musicians behind her. I really like what she’s doing and I’m really excited about all the stuff she’s releasing.

► Do you think your involvement in the scene has shaped Whale Talk and what you hope to do?

Betsy: We started Whale Talk because we saw all our friends in bands and we wanted to be part of that. We were really inspired by all our friends who had the confidence to do that. We got our first gig because of our friends.

Freyja: Yea, January asked us to play our first gig. I think it’s shaped how we do things. It’s like, well that’s what other people are doing so we’re going to do something slightly different. But also if that’s working for them, so this is the order of things. We get a lot of advice from people as well.

► Do you have a favourite gig or highlight so far?

Freyja: The Empire, the first time we played.

Betsy: We’ve played twice now. I just love it as a venue. I love the backstage area and everything and it feels like we’re playing in a proper venue and so exciting. I really loved it the first time we played because it was only our first gig. ‘Why are we here? Why are we in the Empire?’ We were playing with Hot Cops, Hello Cassanova and Sleeping Outside. We love those bands so it was incredible.

Freyja: We thought that’s an amazing line-up, why are we in it? Then our next Empire gig, the same thing. That was so big.

Betsy: The highlights are just playing with other bands. 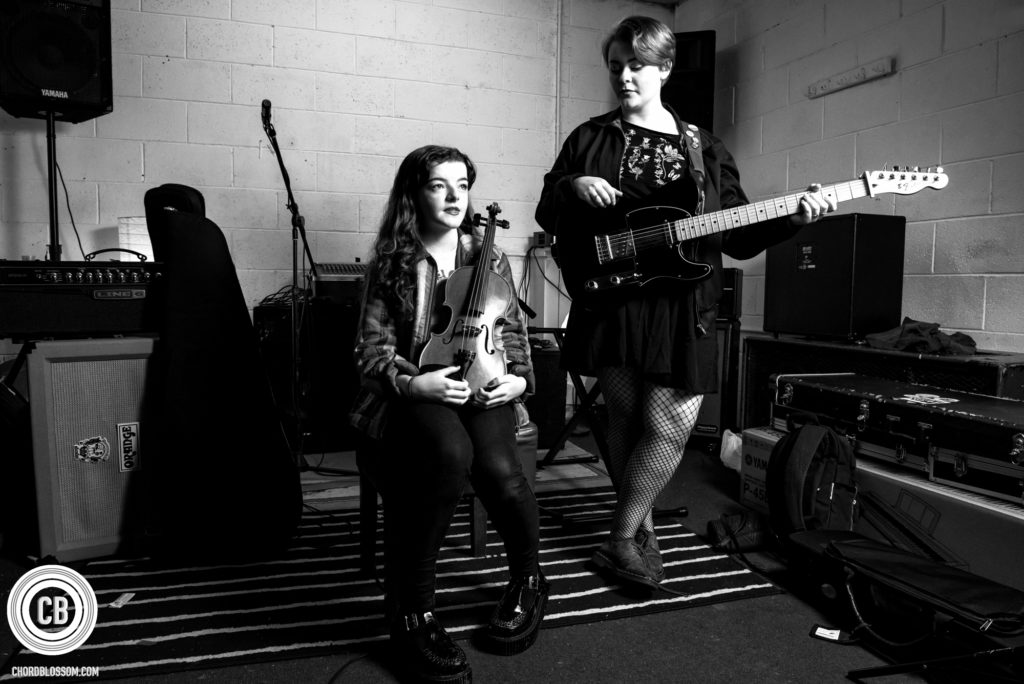 ► Were there nerves playing a venue that size?

Betsy: I was so nervous the first time we played the Empire. I got shouted at because I forgot my jack lead. I was nearly crying before we got on stage but it was fine, I faced my fears. The next time we played, I was able to just enjoy it.

Freyja: I was the other way around. I’m a micro manager so I was stressed out about Darren and Adam playing their parts. It was a lot less stressful when it was just us. Yea, I know I know my thing and you know your thing. Then with them, I thought it was all going to go wrong. And it didn’t. But I was much more stressed.

Betsy: I was probably less stressed because there was more sound masking mine. The drums and the bass distract everyone from what I’m doing. But there were a lot more cameras at that one. I take photos at the gigs all the time and I think it’s fine putting a camera in someone’s face but not when they’re doing it to you.

Freyja: That was really distracting. There’s two photos of me just glaring at the guy who’s taking them.

Betsy: They love to zoom in on my face. You cannot look nice with a violin under your chin.

► Where do you think you’ll be with Whale Talk this time next year?

Freyja: I’m not going to give ourselves mountains to climb.

Betsy: It would be cool if there could be a Whale Talk EP. There’s a lot of songs we have that haven’t been recorded or releases.

Freyja: We’ve already started working on more recordings. And I think we should do a lot more gigs, like Dublin sometime. We haven’t reached out for a gig yet, which is really lucky, but now I want to do a lot more.

Betsy: We’ve been taking gigs that people have asked us to do, apart from this launch and the garden show. As well as solidifying our band situation. Because we’ve been asking people to play gigs but it would be cool if we had permanent members.

Freyja: Permanent members, so we can all practice on the same days.

Whale Talk will headline our next Chordblossom gig on Thursday 30 November 2017. They will be joined in McHughs by Joel Harkin and Lucy Bell. 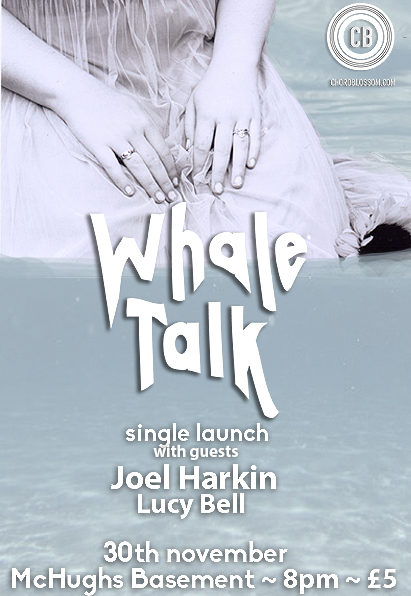