by Melanie Brehaut
in Interviews

Gacys Threads just keep going from strength to strength. They never put on a bad show, and they always put their heart and soul into everything they do. This talented bunch are definitely riding an ascending star at the moment, and the EP they’ve just launched should only propel them further.We sat down with Stephen Currie, Aaron Vance and Blane Doherty of the hardcore rockers, to get the lowdown on their upcoming EP, future plans and which of their heros dig their music.

► Tell us about your recent split EP?

Stephen Currie: On 7th September we released a Split 7” with Colossus Fall from Switzerland. They’ll be visiting us in October. All being well, they’ll be playing with them again at Voodoo on 24th of that month.

► How did it all come about?

Stephen: Basically from me running Savour Your Scene Records. I had just released Coilguns, a Swiss band featuring members of the Ocean Collective. I’d paid into that release with a couple of the other guys. And then I noticed a lot more Swiss and European people adding the label on Facebook. I just happened to see this guy; he had a guitar in his profile picture so I ‘friended’ him, started chatting to him. He was like, “My band play with Coilguns; I play in Colossus Fall”. So I chased them up. They were very Converge meets Hatebreed, a wee bit of Keelhaul – you know that sorta good balance of progressive hardcore. So it was basically me and him back in November; we just got chatting away.

I think by about December/January we had agreed, “let’s do a split vinyl” cos it means you can get a label in Switzerland, a label in Ireland; I’ll find a couple of others and you’ve got four distributors.

Blane: The band really wanted to do vinyl as well. The three of us have been collecting vinyl for years! Whenever we first started the band, we all collected, especially me, so we always wanted it. We always wanted to release vinyl. And the last couple of years, with CD’s becoming redundant, vinyl’s coming back around again, so it’s great timing. And it gives us more opportunities; people are more willing to pay in for vinyl, whereas with CD’s you had to get a lot of CD’s made, a certain number. But now circles are forming, more people are paying in; this thing is worldwide. Like labels have been doing for years.

Stephen: That’s why I started the label. Because we were in the band since 2007, playing since 2008, and we had three EP’s under us and every pitch I was doing the labels were like, “too metalcore, too this, too that” and I was like for fuck sake! DIY! We do everything ourselves anyway: pitch the band, drive the band…why not just release our own shit?

Because I was pitching us from a label perspective and not a band perspective, people were actually paying a bit more attention. So I can find bands on other labels, like the Colossus Fall guys. If I pay into their releases and they return the favour – scratch my back and I’ll scratch yours – next thing I know we’ve got a French label (Lefthand Records), a German label (Edible Noise Records) and Black Label Records from Scotland, all helping us out with the 7”. We’ve got the Swiss boys that are going to sell it in Switzerland. So that’s four different countries’ distribution, and then Ireland for us. It’s just like, you land on your feet; clichéd as it sounds, it’s networking. All these bands that sit back and go, “We’re gonna make it! We’re gonna sit back and someone will come and pick us up”. Dry your eyes! Not gonna happen.

❝ I somersaulted off the stage and everyone decided to move. ❞

► The whole music industry has changed. It’s either a long, hard slog and it takes a long time before you see any return, or there’s the instant fame, the ‘X-Factor’ type fame which doesn’t usually last very long.

Stephen: But to me there’s no passion, no integrity there; it’s all cock.

Aaron: You get bands like, hardcore punk legends,Tragedy who made a conscious decision to NOT promote themselves through any big media, not pitch themselves to any labels. They’re been doing it themselves for years, and they’re underground icons.

Blane: Or even Pink Floyd, who released ‘Dark Side of the Moon’ which stayed on the Billboard charts for sixteen years, and there was not one promo shot of them. Or Pearl Jam who refused to take photos. We’re not the first genre to do this; I think today you have to do it cos no-one’s going to give you a £10,000 advance for you to go to California – that doesn’t happen.

► So, is the split EP going to be available digitally?

Stephen: There will be digital downloads with the three hundred actual vinyls themselves. I’ll put it on digital distribution; it’ll be available on iTunes and all that malarkey, I’ll be funding all that sort of stuff. As much as we love releasing it on wax and having a physical, there is still very good demand – not even for downloading, it’s streaming. People will always whack on Spotify, whack on last.fm. And even wee things like download codes are very much important to people when they do have the wax, they want the codes too.

We’ll release a video to promote it as well. Cos that’s what I do, I’ll sit and type ‘Mesuggah’ into youtube before I would actually sit down to Spotify. I would probably watch a video for it (first) because I find it a very easy agent.

I predict: this might sound silly but you look at all the new Macs and stuff; they’re all Cloud-based, there’s not even a CD drive on the machines! So in about twenty years CD’s will come back and everyone will be like, “oh look at the booklets and stuff!” Haha, cos nobody will have CD burners; they’ve all disappeared. 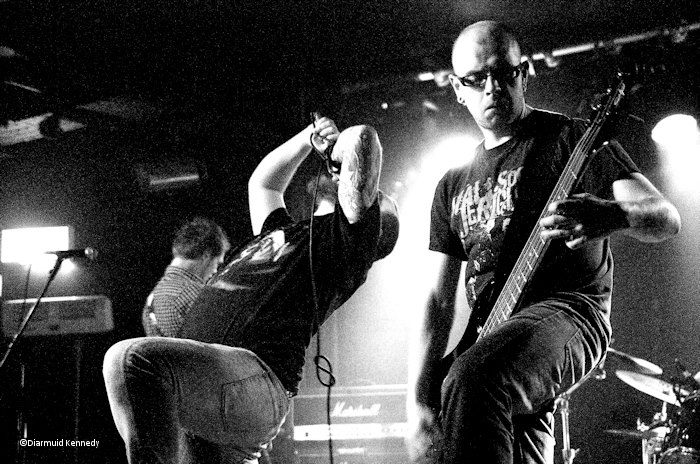 ► After playing with some great acts, have you ever been starstruck while touring? Met your idols?

Aaron: We met Fear Factory which was pretty cool!

Stephen: Maybe at the start, but you soon realise that they’re normal.

Blane: For me personally it wasn’t on tour, but last year when I went to see my favourite band, Converge. We had just made our first demo, recorded it in Jonny’s living room and gave it to vocalist Jacob Bannon onstage. Then last year they were playing in Dublin. I was up at the front giving it stacks and in the middle of the whole set he just stopped and went, “Gacys Threads!” to me! So for me to get a shout out like that from him was amazing. He runs a record label (Deathwish Inc) with thousands of demos like!

► Do you have any qualms about stage divers since the trial of Lamb of God vocalist, Randy Blythe?

Aaron: It was a sad thing that happened, without a doubt, it’s unbelievable. But I don’t think it should really deter anybody. You see bands like Sick of It All and Agnostic Front; they’ve been doing it for years, their shows thrive on it.

Blane: Two years ago, I was seeing Converge in Dublin and I somersaulted off the stage and everyone decided to move, and I really landed on my back! There was a balcony so I knew everyone could see me, so I just walked off until I got outside.

Aaron: When we played with Cancer Bats I dove offstage, and everyone was like  “aargh!” So I just crashed on the floor, it was class! It doesn’t bother me!

Stephen: The first time Lamb of God played the Mandela Hall I came out with two black eyes! I intended to go to that show and be like, “I’m just going to chill at the back , have a few beers and watch Lamb of God”. And before I knew it, Neve from 99 Miles of Bad Road threw me up, crowdsurfed me, and about ten minutes later I came back like, “argh my face!”… two black eyes the next morning!

Blane: That’s the way most gigs go in Belfast.

► A lot of bands talk about how Belfast crowds get so excited because so few bands come over here. Do you agree?

Blane: You take that on to the level we’re at. We get to small towns like where I’m from, Strabane, who don’t get many gigs coming through. You get crowds in some bigger towns that just stand back, like ‘too cool for school’; then you get into smaller towns and people are like, “This is class!” We can stay on later because you don’t get hassled, you can play that bit later and destroy the place.

► What does the immediate future hold for Gacys?

Blane: Jonny, our bass player isn’t here at the minute. He’s opening a studio in the next few weeks, so we’re going to start tracking our new album.

► Are you set to tour soon?

Stephen: I would like very much to tour next year. But again there’s budgetary reasons; we might not be able to afford to go away until the album is released.

We’re trying to move away from doing four dates back-to-back in Ireland because it always ends up on Sundays, and you’re fucked from coming back from places like Cork on a Sunday. The first few times we did Cork on a Sunday it was a disaster. I mean who would see an unknown band on a Sunday?

Hopefully we will be going to Switzerland! Then we’re playing one of the best shows you can play in this country: Siege of Limerick.