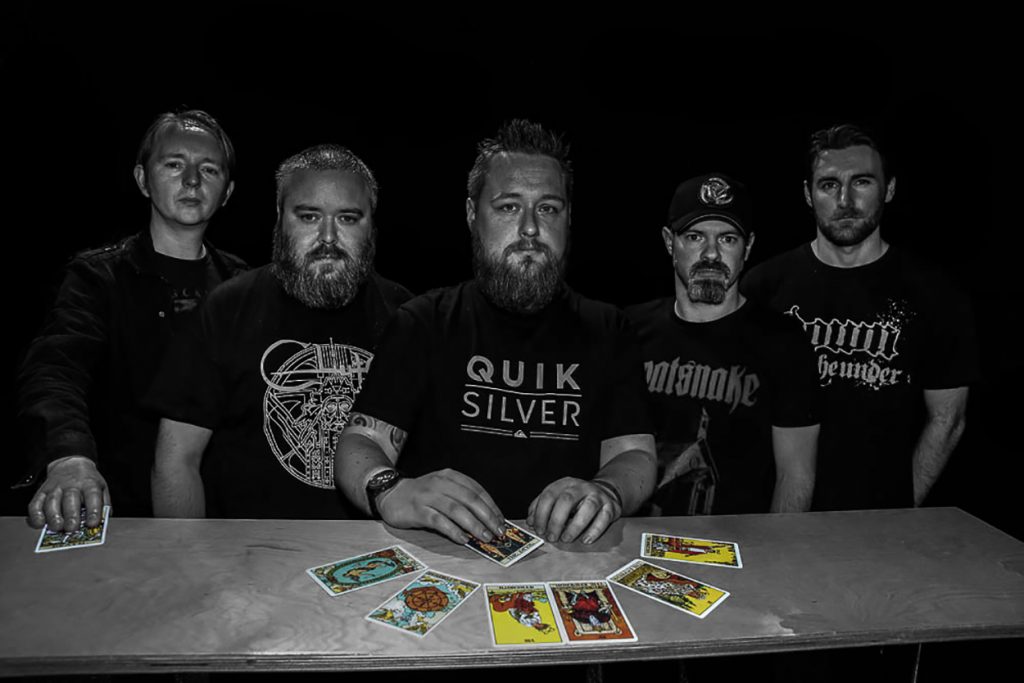 Following their trailblazing set on the Jagermeister Stage, we caught up with groove/stoner rockers Zlatanera to talk about 2016 – their biggest year yet – their new album, and future plans for the band.

►Chordblossom: Congratulations on playing Bloodstock!Is that a big tick off the bucket list for you?

Anto (bassist): Definitely! Playing a major metal festival is something to tick off for sure.

►CB: How did you think your set went?

Anto: We thought it went really well. As well as people from Northern Ireland and Ireland that know us, your usual support, looking down at all the new faces that haven’t seen us before literally humbles you, in a way. You feed off their energy and get into it.

Keith (drummer): Yeah, it was a lovely crowd.

►CB: This has been a big year for you: lots of live shows, Bloodstock, and your debut album was released. How have you been enjoying 2016, in a work/band sense?

Andy (vocalist): We can’t really think of the band as work, we enjoy it too much!

Anto: It’s always fun, always. For me personally, I’ve never released an album before, and it getting exposure and then coming over here has just been fantastic.

Andy: It’s been good to see the response to the album, even so early on. It’s been getting decent feedback, which makes the ‘hard work’ (laughs) pay off!

Anto: Also, we self-released it in February this year, but then with the PR behind it it was re-released, so it’s been a kind of double whammy! But it’s really good that more people are going to hear it.

►CB: It took kind of awhile to come out – the band has been around for awhile! Is there any reason for that?

Anto: It was mostly to do with finances! We had all the songs there and we knew we could record them, so it really came down to doing them properly, in the way that you want to get it done, which meant spending the money. And even the way it was recorded was still at a nice cut rate but it still took awhile. So it was about playing shows and saving the money and eventually having enough to pay for it. And then all that money just went back down to zero again (laughs).

Andy: It was frustrating times for us because, as you say, we’ve been on the go for quite awhile, and to be sitting on those album tracks with no means to record them was quite frustrating. But it was outstanding to finally get into the studio and Niall, the guy from the studio, did a fantastic job, it was excellent.

Anto: It was also about getting everybody in the same place at the same time as well! Because we recorded it originally, then there was the mixing, and then for all of us to be happy…it’s just a process you know? And we obviously didn’t want to just be like “yeah, that’ll do”; we were all very committed to it being the best that it could be, which is why the process took so long. And I personally think we did the best job that we could at the time and we’re all very happy with it.

►CB: Because it has taken so long, does that mean that you have new material that’s starting to appear?

Anto: Absolutely! (laughs). We’ve got about four songs now I think, so we’re halfway to making another album!

►CB: Would you make an album or an EP?

Anto: I’m not too sure; the thing is, there’s so many options. Like, when you’re finishing off a song there’s maybe already another new one coming up in the background. So it’s hard to say whether we’d go for an album or shorten it to an EP. Obviously an EP would be cheaper to do! (laughs).

Andy: It’s early days at the minute, because obviously the first album is just out, so we kind of need to push that and then see what we’re going to do. There’s so many options now: even vinyl; people are buying more vinyl now, so we could even do a single or a split single, or we could do an EP or another album.

►CB: You could start an EP and find it grows into an album!

Anto: The next one will be a double album at seven hundred minutes long…(laughs).

Andy: Not Satan, it would be about the other side this time! We’ve done Satan – he’d maybe make a guest appearance!

Andy: I don’t know if you’ve heard the story, but it was (guitarist) Willie (Caulfield) and Anto, when they were in Residual Effect, said that every heavy metal band has to have at least one token song about the devil. And one song was written, which then turned into three! And that’s just how it happened.

►CB: Obviously you’re already thinking about your next release, but do you have any set plans for the future?

Anto: We really want to make a video. We made a lyric video, which (guitarist) Andy (McCallister) put together, which was pretty cool! So the next stage is making a video for one of the devil songs. Plus there’s touring that we need to think about: if we can do it, if it’s viable – and we’ve got other festivals and things at the end of the year: we’re playing Siege of Limerick again..

Anto: At this point we’ve now got shows every month bar December until the end of the year. And then when next year comes we’ll be thinking “ok, what do we want to do now?”, whether it’s playing across the water again or something like that.

►CB: Would headlining Bloodstock be another tick off the bucket list?

Andy: If you had seen my hands shaking before we played the Jagermeister stage earlier! Headlining that main stage would be fantastic, but I might need to get a handful of Prozac into me first (laughs)!

►CB: How about working your way up? First the Sophie stage…

Keith: I think once you’ve got your foot in the door it’s only a matter of time – you do work your way up that way.

Anto: I doubt it’s ever going to be the main stage but I suppose you never know! We’ll certainly come back and play hopefully; get the New Blood stage and then maybe the Sophie stage – who knows? Onwards and upwards!

►CB: The type of music that you play – the genre- is known for being rather solemn and takes itself very seriously. Is the humour you use a direct response to that?

Andy: I’d say it’s more the result of our personalities. None of us are particularly serious guys: we take the songwriting process and that kind of stuff seriously, but we’re all fairly lighthearted individuals, so I think that comes through in the music – without bringing it down to base level, but still humorous. Other bands can be solemn if they want, that’s cool, but it’s not us (laughs).

Anto: To me, being in a band is an expression of who you are. We take the music seriously but we like to have a laugh as well, which I think is coming through. And honestly, I don’t see us as solemn at all! But I get what you mean about that kind of music. And we do have our serious songs, which I think is something that people don’t get, or are very comfortable with, that mixing of serious songs with songs that would be more frivolous. But that’s just the way it is: when we get an idea for a song, what way that song is will decide if it goes one way or another. And hopefully people will respond to that; we have had a very positive response so far. It’s been going well so far and fingers crossed it will continue that way.

►CB: Definitely! Is there anyone here that you’re looking forward to seeing, or have already seen?

Andy: Venom last night were incredible. And Corrosion of Conformity; we know the guys so that was great.

Keith: I only flew in yesterday, so my highlight so far has been Two Tales of Woe; they were fantastic. I’ve never seen them properly before, only bits and pieces, and when I saw them today they were incredible. I’m also looking forward to Gojira and Mastodon.

Andy: Cyber Witch Cult. And we thought Zlatanera was difficult to say! (laughs).

Anto: That’s them, they were really good fun. And the big bands as well: obviously I wouldn’t mind seeing Anthrax and hoping they play ‘Indians’, Slayer…

Anto: Gojira and Mastodon should be cracking, I’ve seen them a few times so I’ll enjoy them.

►CB: Thanks guys! There’s nothing else to say but ‘enjoy the rest of the festival’!

All: Thanks very much!