ADVERTISEMENT
Ash with support from The Wonder Villains Friday 15th June 2012 – Oh Yeah Centre There is a triumphant vibe about the Oh Yeah Centre tonight as the punters pack into the intimate Oh Yeah Centre to watch one of Northern Ireland’s best musical exports celebrate what has been an incredible twenty year journey. Opening for Ash tonight are The Wonder Villains, currently riding their own mini wave of popularity. Certainly my brother and I reckon we have seen them at least five times this year supporting various different bands solely in Belfast. The Wonder Villains as always are full of enthusiasm with Eimear chatting away to the crowd, while Cheylenne, Ryan and Kieran all give the impression of a young band hungry for success. The indie pop band light up the venue with their summery pop anthems in complete contrast to the terrible weather outside. They play a good selection of songs off their two EP’s as well as throwing in a few new tracks that will hopefully make it onto their forthcoming album. Most prominent in the set is ‘Zola’ which is quite relevant considering “there is football or something on at the minute” Eimear muses before launching into the catchy number. As is becoming a bit of a habit, the Villains impress and surely they are on course to achieve big things. Taking to the stage at around 10.15 Tim, Rick and Mark receive a rapturous reception and it is quite clear from the grins on their own faces that they are delighted to be here. The band have got such a back catalogue of material that their set is jam packed with all their classics. Early into the set we are treated to ‘Girl From Mars’ (the urban myth that it was originally ‘Girl From Ards’ is unfortunately untrue!) which is the first sing-a-long of the evening, but there are more and more to come as the night progresses. ‘Oh Yeah’ is particularly sweet for the guys as that is of course the song that tonight’s venue is named after. ‘Shining Light’ which was voted the top Northern Irish song at the recent Great Northern Songbook event at the Ulster Hall only a few weeks ago is a definite highlight of the set with the crowd joining in at every possible opportunity. While there will always be omissions from the set list it would be fair to say that tonight Ash have played a very good selection of most of their stronger material with ‘Kung Fu’, ‘Jack Names the Planets’, ‘Evil Eye’ and ‘Arcadia’ all making appearances. To my own delight they even find time to play ‘Walking Barefoot’ which is my favourite Ash song. I would have liked to have heard ‘Starcrossed’, so keep that in mind for next time guys! An emotional Terri Hooley re-introduces Ash to return for their encore, he praises them for being such a great band and for having had such an influence on the Northern Irish music scene. The guys return for their encore with several guests in tow. First up are two members from a band called ‘Lazer Gun Nun’ who Tim says if it wasn’t for them they wouldn’t be where they are now as they introduced them to all the music they were influenced by. Tim then welcomes out Bronagh Gallagher and manages to drag out Terri Hooley again to perform a cover of the legendary Undertones classic ‘Teenage Kicks’. Terri perhaps sings for 30 seconds then he disappears offstage but it is a nice touch from Ash for inviting him along. We also get the chance to see Rick step out from behind the drums as Alan from Lafaro joins the band for one song. With it coming close to midnight Ash are keen to stay on stage and perform as they officially reach the anniversary of their 20 year existence. They look to the crowd to provide some suggestions and end up playing ‘Angel Interceptor’ and a cover of Weezer’s ‘Only In Dreams’ despite the band claiming they can’t remember how to play them, they turn out well. As we edge nearer to the end they launch into an extended version of ‘Return of White Rabbit’ with it’s cool electro vibes washing over the audience. The big finale is one of their greatest, ‘Burn Baby Burn’ which brings to a close a fantastic evening celebrating a very impressive back catalogue. It is clear that even after twenty years of heavy touring, working on new material and all the other highs and lows that come from being in a successful band that Ash are still as enthusiastic as ever. Tim in particular spent most of the evening bouncing up and down and rocking out on his guitar while Mark and Rick gave us the rhythm from their impressive bass and drum playing. Tonight was further proof (not that it was needed) that Ash are one of the greatest acts that Northern Ireland has ever produced and the fact that they have been so successful is down to all the hard work they have put into their careers. More than anything, I would say that everyone who managed to get down to the gig tonight hope that Ash will still be writing new material and touring for at least another twenty years! 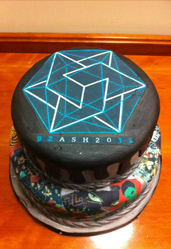