Having had the privilege of chatting to Luis and Kelly of the Dollyrots before they appeared on stage, I was keen to see how the audience would take to them. Not surprisingly the crowd loved them, their pop punk sensibilities lending very well to your typical Bowling For Soup Fans. We are treated to a punktastic cover of ‘Brand New Key,’ originally performed by Melanie (you may have seen it on an advert for an HP Printer).  The stand out track of their set is ‘Satellite’ which has teen angst written all over it and will surely result in a few downloads when tonight’s punters make it back home. We even get an early glimpse of Jaret Reddick as he helps Kelly out on her vocal duties. Perhaps ‘Because I’m Awesome’ showcases how this DIY band has survived so long. They have a tight bond that results in a great stage presence plus it helps that they are both very nice, down to earth musicians! 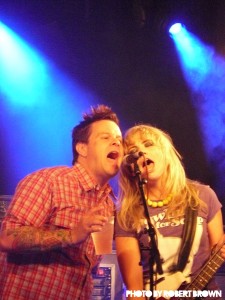 It seems strange to say that Bowling for Soup have been around for over 18 years, the reality is that there are very few bands that stay together for such a long time. Thankfully for tonight’s crowd the band are in as fine a form as ever and play a hit packed and energetic set that has something for everyone.

Bowling For Soup’s attitude that everything should be fun is best highlighted on two tracks from their 2009 album ‘Sorry for Partyin.’ ‘No Hablo Ingles’ and ‘My Wena’ have the mixed age crowd singing along to the chorus despite the slightly cringe worthy subject matter of the latter. There is even time some pretty good covers; the first being Britney Spears’ ‘One More Time,’ followed by a rendition of Fountain of Wayne’s ‘Stacey’s Mom.’ Jaret tells us that they have claimed ‘Stacey’s Mom’ as their own since people always credit them rather than Fountains of Wayne with writing it. The band is in full flow tonight with plenty of wise cracking, crude jokes and lots of crowd interaction. It’s easy to see why they have developed nearly a cult like following as crowd interaction is at a premium tonight. The band even taking a mid-set break just to allow fans to take pictures of them posing (“Bowling For Soup – The Band You Can Wave To”), which Van Halen ‘Jump’ blares in the background. 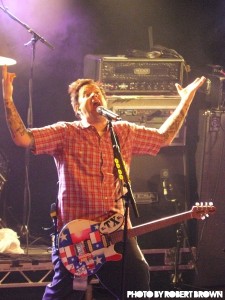 It isn’t long before we are back into the songs with ‘Emily,’ ‘High School Never Ends’ and ‘Almost’ all being crowd pleasers. For ‘Let’s Go To The Pub’ they even have their own pub set up on the stage for the Dolly Rots, Patent Pending and themselves to frequent! Despite the fact I cannot play any instrument I would love it if Chris Burney would teach me how to flick the plectrum in the air and catch it – something he does multiple times during each song. 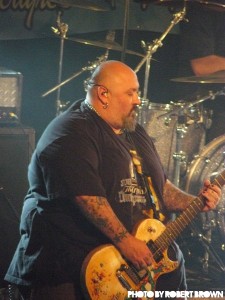 I would never really have classed myself as a big Bowling For Soup fan but having witnessed such a entertaining set close with ‘Girl All the Bad Guys Want’ and ‘1985’ I have been converted. Their set clocked in very close to the two hour mark meaning fans definitely got value for money even if you forget about the two support bands. The majority of those in attendance tonight leave the Mandela with sore throats from attempting to out sing the band and in reality fans could not have asked for a better show tonight. 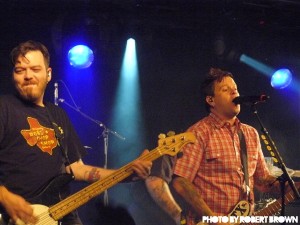