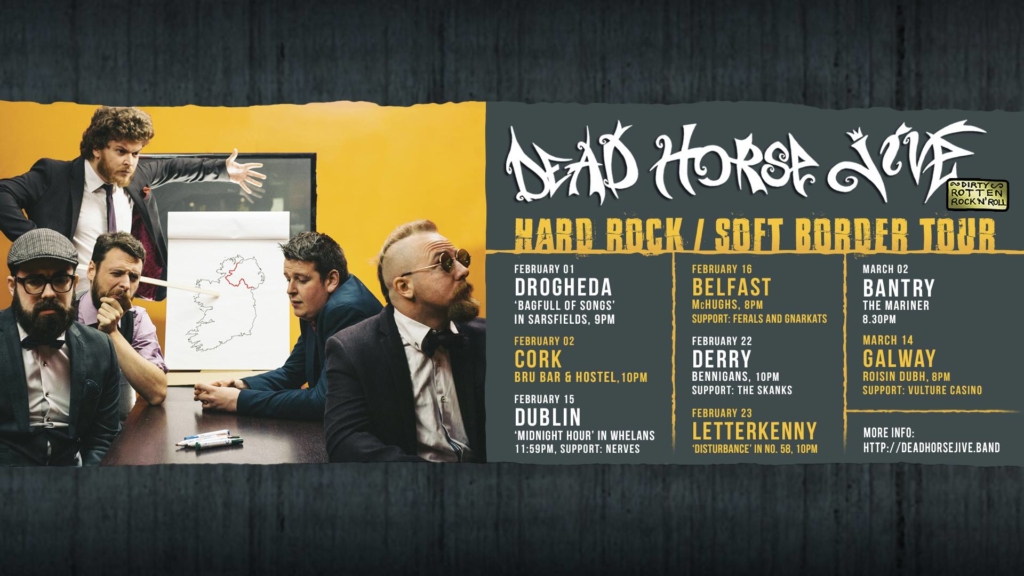 “Lad no joke, we were actually just talking about you.”

This is how I am greeted by Sam Foote of Ferals on the top floor of McHugh’s bar. As I begin to answer, a call emerges from Tartarus. Soundcheck is beginning. I make my way downstairs with Foote, eager to secure a seat for the beginning of Dead Horse Jive’s Belfast date for their Hard Rock Soft Border tour. No stranger to soundchecks, it is rare for me to get excited for what is essentially a live practice. And yet, as each band played through a few numbers, I found myself white-knuckled, gripping the edge of my table, 8pm couldn’t come quick enough.

It is 9:16 before Gnarkats take to the stage. I sip my Guinness as the Belfast group cut into their set. Fortunately my hand remained on the glass, otherwise, the blast of the kick drum threatened to spill it. Boasting an anthemic presence with sweeping alt-rock vocal harmonies and baton charge breakdowns, the sustained distorted groove of the kats was a sight to see. Curators of a rambunctious sound, their sing-song choruses (“Can’t keep you away ooh-oh-oh-ooo”) translate well onto the live circuit, while the shredding climb of the electric riffs and the relentless thump of drummer Stuart Robinson give them their necessary bite.

Second onstage are my chatty pre-show bedfellows Ferals. The ZOOL Record affiliates looked to continue their recent surge following the release of their latest single ‘The Low’. Like their predecessors, they peddled an alternative sound but drew from a much deeper well of sonics. Their set was highlighted by a cascading avalanche of racket and punchy rhythms. Grimace enduringly good at times, from the fiery vocals to the spitting licks, their brand of sky-high sound is a fearsome weapon when employed live. Their unrestrained nature allows for an indulgent sound, one that elicits chest thumps and hair flicking to a manic beat. Guided at all times by fuzzy harmonies and meaning drum fills, by the end of the set their was nary a dry human in the venue.

Headliners Dead Horse Jive (cracker name) slink onstage, looking like the type of group the Shelbys would hire to burn down a bar. They manage to sound less subtle. The opening distortion brings to mind the image of some primeval ooze, as their no-nonsense, inexorable ethos grabs a hold of the crowd and shook them in their boots. A pub rock theme with iron maiden vocals, the hard-nosed ethic to the group was addictive. The shredding electric blues of their breakdowns weren’t exactly turn offs either. Different from their openers, Dead Horse Jive doubled down on the mania instead of the malice. Covers of Queen hits ‘Fat Bottom Girls’ and ‘Pretty Little Thing Called Love’ were received with laughs of approvals, while original material had a 70’s swing to it that had every hip in the room sashaying.

It is rare that I find myself unable to identify which band I enjoyed most on the night, with this being one of those occasions. The cheers scarcely stopped throughout the evening, and it’s fair to say that those who elected not to attend missed out on some serious groove.