by Anna Cafolla
in Live Reviews

A cold, dark February night in Belfast was pierced by a surprisingly cheery crowd that made their way into the darker, Heineken heavy air of The Limelight. Maybe the crowd’s disposition, which projected itself so fiercely it could have short circuited the neon stage lights, wasn’t so surprising; given the reputation and expectation of the acts about to take to the stage.

This night saw Ed Zealous launch their debut album Wired. The Belfast four piece, so hotly tipped over the past few years they’ve been about our fingers are blistered, have finally given their ever expanding fanbase what they’ve been asking for. The night itself was hosted by Across The Line’s Rigsy, a champion of Ed Zealous and their “unique, fizzy sound that would get any broadcaster in a lather…catchy enough that you imagine listeners turning up the volume”.

The opening act of the night was Affleck; spawned from the ashes of EatenByBears and playing as a four piece for the first time. In a scene saturated by electronica and Apple Mac players, Affleck may at first glance be overlooked. However, the explosion of disconcerting crescendos, dark synths and a stalking back beat chase you until you turn around from the bar to listen. There’s a definite hush in the bustling crowd as they revel in the creative and technical brilliance of this piece. Anor Landor could very well be the soundtrack of a video game, with tight, haunting vocal harmonies and a knife sharp bass line provided by Clarke Phillips that follow you through distant barren realms far away from the Limelight. Cat King Lightning transports you to another realm once again, with seamless movement between the electronic and the live. Pollock’s skill on the drums takes centre stage, a lone stitch in a blanket of layered sounds. When the set takes a turn towards the pop, we’re pulled back into the haze of falsetto and dream like guitar lines. The live violin is an exciting enhancement, and for want of a less cheesy pun, another string to Affleck’s live technical bow. Drifting through the mist of the set, it’s unsettling how quickly it goes by.

Next to take the stage was Go Wolf, a heavily anticipated act stemming from the success of their track Voices, featured on the French Kitsune compilation. Summery synths, pop reverberating guitar lines and Scott Jamison and Hannah McPhillimy’s voices complement each other to create the vibes of early Human League. The confident droll of the bass reflects Talking Heads, and eyes are on Chris Sloan’s cool, languid movement. Voices is the track many in the audience have been waiting for, and the opening vocal arrangement that very much recalls The XX sends a shiver through the crowd. It becomes a sunny disco pop piece, with the command of the bass and toe tapping percussion leading a rapt pigeon headed audience. The tightness of the act is so prevalent it’s almost robotic, and the set moves with an ease that only seasoned performers like Go Wolf can enjoy. It’s mesmerising to watch. The lyrical beauty provides a freshness that transcends the indie pop scene and the obvious eighties synth pop influences. One More Night, touted as the next single from the band by Jamison, brings the set to an end. The guitar is as smooth as the vocals with the right amount of syrupy pop to see the crowd dancing.

The apprehension in the air was palpable as the final act approached; introduced to rapturous applause and screeches, Ed Zealous took their places. The pace is definitely taken up a notch from the preceding acts. Medicines, a single released before the New Year to stir anticipation for Wired, stirs a similar feeling of exciting in the crowd who surge forward to dance. The success of the song is shown by the legions in the audience who can’t help but sing along to the punchy chorus “What is going on with your mind? What’s going on, what’s going on!” Paul Irwin bangs the drums with unmistakable passion you can’t help but marvel at. Talk with Your Hands, a slightly slowed down number, is where Steve McAvoy’s vocal competence is elevated, and it’s a track that wouldn’t go amiss on Bloc Party’s Silent Alarm. 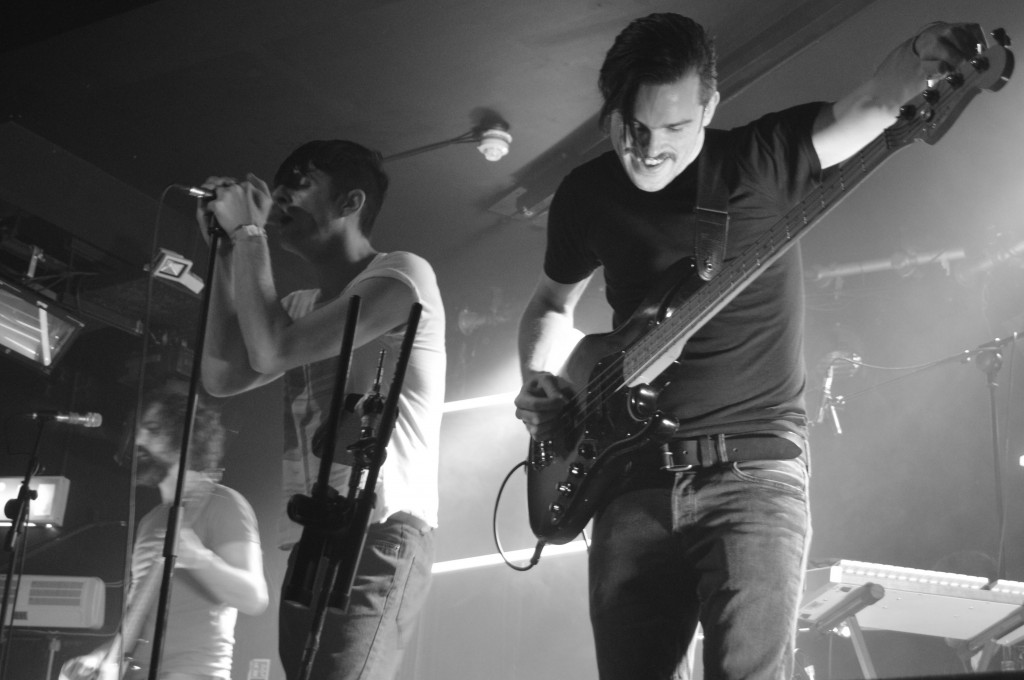 The set hurtles through punky, emotive guitar solos, racing bass lines and clashing cymbals that really come to life in Videohead. They ascend to new, exciting heights driven by Andrew Wilson’s powerful guitar riffs and solos that have the crowd’s collective heart beat a mile a minute. The set’s punchiness and the punk-like hooks call to mind the likes of You Me At Six, but with a stronger technical ability and unrivalled layers of electro pop. It really isn’t up for discussion how great these guys could be, especially if you were trying to debate with the Limelight’s audience, who gave Ed Zealous as much magnetic energy as they got. Diamonds for Eyes brings the set to a peak with a dominating bass that vibrates through the venue and the most energetic synth sound of the night.

The band leave the crowd exhausted and most, like myself, are left breathless and with the neon lights burned into their retinas.