Opening up the second week of the Open House Festival’s trip to sunny Bangor (no sarcasm tonight it is actually roasting) is Gareth Dunlop. Fast becoming one of my favourite local acts he brings his soulful voice to an appreciate crowd. Tonight there is a good mixture of old and new material with showcases of new songs ‘Wrap Your Arms Around Me’ and ‘Sweet Embrace’ highlight the rich vein of form that the Belfast singer songwriter is in. As usual though the real highlight of his set is ‘Fool’s Desire’ with the large crowd clapping along to a song that sounds fantastic with a backing band. 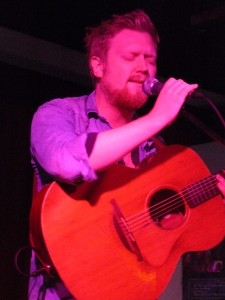 Colly Strings are next to have the privilege of playing to a packed venue and they do a good job of taking things up a notch. The indie rock band bring all their trademark riffs and catchy choruses to this hometown show. ‘Another Day Like This’ and ‘Take A Good Look’ are evidence to this point and they also have time to intrigue us with ‘Gone Not Lost’ which will surely become a regular number in future set lists. Closer ‘Teddy Robinson’ is the stalwart of any of their sets and despite Travis clearly struggling with a sore throat doesn’t lose too much of its punchiness. 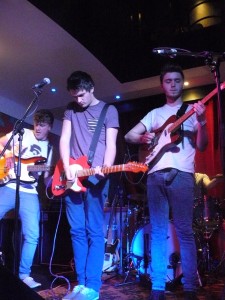 But it is abundantly clear that the majority of the punters in the Goat’s Toe tonight are here to see local heroes Kowalski. Opening up with the delightful ‘Outdoors’, the shimmering pop tastic number is perfect for the summery evening sunshine in Bangor. We are then treated to one of the first plays of ‘Sunroom’ which will features on their next release. ‘I.D.O’ and ‘Navigate November’ highlight the smooth vocals of Louis and the multi-layered guitars. There have been shouts from the crowd all night for ‘Get Back’ and as the band unleashes their most popular song, the Goat’s Toe erupts as the crowd sing and dance along. The boys have put on a great show tonight and the crowd are left wanting more, based on tonight’s performance Kowalski will be in high demand once their new release hits the shelves. 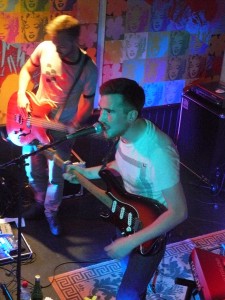