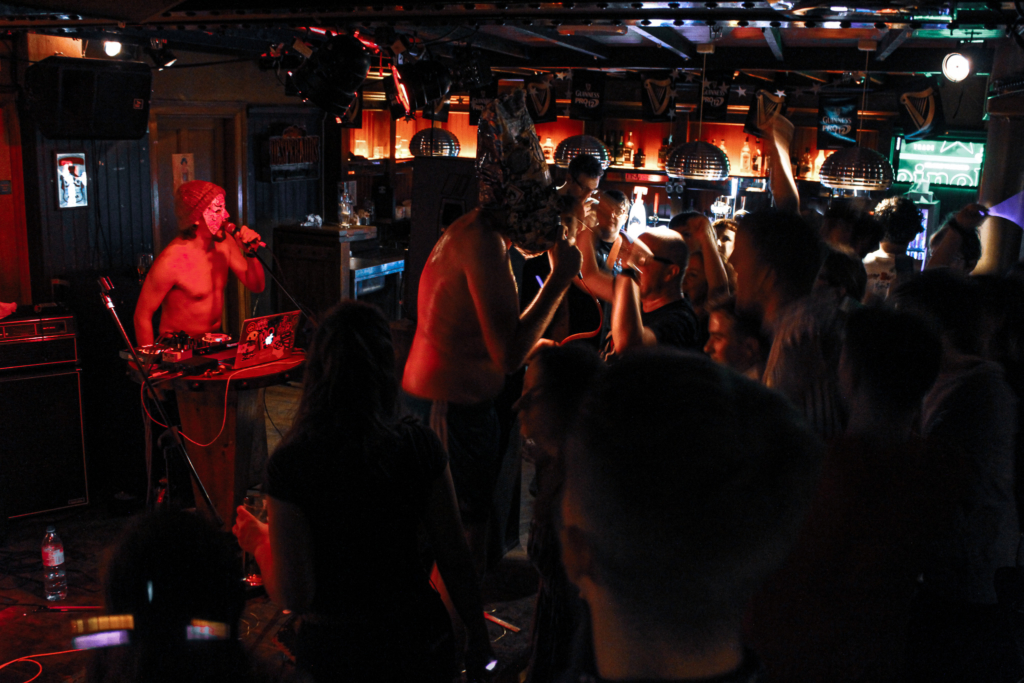 With the latter half of the decade coming to a close, the solid swing in Irish music towards DIY, both in performance and industry individuals, has become more noticeable than ever. Belfast based promotion company Sizeable Bear have carved out a spot for themselves within the city by incorporating some of the best new acts around the island into their shows. Tonight, they dive into the creative heartland of Limerick for their headline act, firebrand performers Post Punk Podge & the Technohippies.

First on stage was Problem Patterns. Freshly minted off a shortlist nomination for this year’s NI Music Prize (‘Oh Yeah Contender Award’), they light up McHugh’s stage with their signature Riot Grrrl ferocity. After a few minutes, it’s easy to see why they’d earned such a lofty nomination. Their ferocious combination of relentless, unapologetic vocals and aggressive riffage gave no quarter and demanded total attention.

Next to take centre stage was alt/punk rockers Mob Wife, who adopted a similar onslaught-esque approach to their set. Highlighted by screaming vocals and punchy percussion, they managed to transfer much of their energetic recorded sound into a tangible live presence. With their blend of post-rock noise, punk rhythms and no small amount of contumacy, Mob Wife were on top form.

Soon, Limerick headliners Post Punk Podge & the Technohippies introduce themselves to the crowd. And let me begin by saying everything you’ve heard about the group – it’s all true. A revelation as a live act, PPP did everything but bring McHughs crashing down around us during their set. With elements of theatre mixed into a live set that had the crowd reeling from start to finish (did they play for two hours? It felt like it. I hope they did), the group had a sense of devilment about them that is equal parts satirical and deadly serious.

It is no hyperbole to dub them as one of the most arresting and terrifying acts at present in Ireland. Frontman Podge spent most of his set embedded in the crowd, powered by an adrenaline inspired euphoric frenzy that had the walls sweating. A debut Belfast show for the ages, we can only hope they don’t wait so long before returning.