I suspect that 2013 will see Go Wolf‘s stock in the local music scene continue to rise and rise. The electro poppers have been selected to take part in next year’s ‘Scratch My Progress‘ scheme from the Oh Yeah Centre where they will get professional advice to further hone their skills. The band are a confident bunch and the extended instrumental for ‘All Good Things’ is a nice touch and really emphasises the danceable nature of the song. It is a shame that there are perhaps only 15 people in the venue to witness ‘Voices,’ easily one of the best tracks to come from the local scene in recent months – it’s a quirky electro number that deserves your attention! 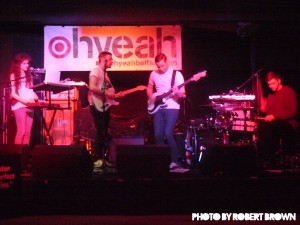 Manchester based The 1975 have received some fairly lofty praise from both print and online press since the release of their debut EP but critical success is no good if you can’t get numbers through the door. It is with much relief that the venue is a bit fuller by the time the band take to the stage, being the generous type they have even arranged for the majority of us to have chairs to sit on! Opener ‘The City’ is a shimmering tune that easily sets the young audience at ease. A lot of tonight’s material has been pretty upbeat despite some darker lyrical intentions but ‘Woman’ is particularly sombre with just Matt playing guitar. He thanks us for our patience in being quiet during it, tells us that the subject matter of the story is a woman he actually met on his last visit to Belfast, so being back in the city brings back a few memories. 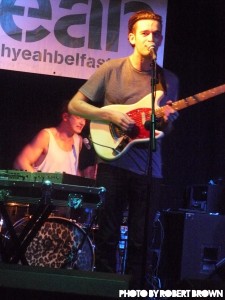 The two closing songs on this evening of good music are the band’s stand-out tracks that have brought about the initial critical acclaim. ‘Sex’ needs no background information – there is no subtlety about the subject matter and lead singer Matt remarks that “you are too young for this song” to the young crowd. ‘You,’ led by a thumping drum beat that really sets up their lead singer to bear his soul on the enchanting chorus. I am not convinced that such an early show is the way forward but although it was only a short set from 1975, it was faultless. They are an interesting prospect for 2013, especially to see what form their debut album takes as their current EP has no real defining genre, they seem to transcend various genres. Add them to your watch list you won’t be disappointed!