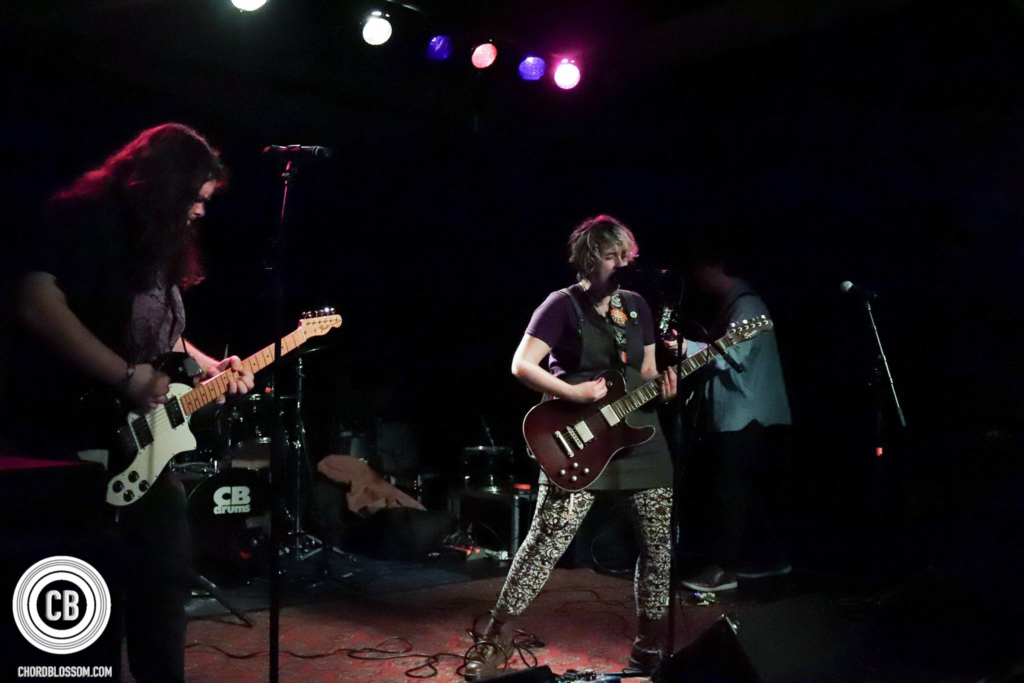 Walking through Belfast to reach the Oh Yeah Centre, the city was bursting with celebration, pride and diversity. The 8th of March celebrates International Women’s Day, and Volume Control and Young at Art celebrated the astounding talent of local women in our music industry, with an all-ages gig. This gig was organised by a small group of young people passionate about music. VC gigs always make me extremely inspired by the growing talent of the music industry, and this was no exception.

Doors opened sharply at 7pm, and the audience began to pour into the concert. It then became clear that some of the audience have both never been into the Oh Yeah Centre before, never mind a Volume Control gig. Parents and other family members bringing their children by the hand around the NI Music Exhibition while pointing out their favourite bands when they were younger, while teenagers gathered around the stage. While waiting for the first act to take to the stage, accomplished DJ Tanya Mellotte from Skibunny, provided to the audience songs to happily dance to, even with an empty stage in front of them.

Girls Rock School NI Graduates were the first band to take to the stage. GRSNI was established 3 years ago in March 2016 by the remarkable Shannon Delores O’Neill, who was also set to take to the stage as the headliner later in the evening. Their volunteers give up their time in the name of “empowering girls and women of all ages to riff, rock and roll!”, it was clear that Volume Control and Young at Art needed this message projected to the diverse audience in the Oh Yeah Centre that night.

Once the Graduates were ready to perform on stage, it became clear that some of the audience members were family members of the girls. Eager husbands moved closer to the stage, their phone in the hands awaiting their wives’ performances, while others held children up, allowing them to bare witness. The seemingly anxious group of Graduates took to the stage, the audience cheering them on with every move they made. The nervousness quickly dissipated as the lead singer, Holly, began to powerfully belt out the opening to a cover ‘Where Is My Mind‘ by The Pixies. The percussion seemed to fill every corner of the room. They continued with the iconic ‘Seven Nation Army‘, the volunteers from GRSNI joyfully dancing just in front of the occupied stage, as well collectively sharing a few proud tears.

The girls then began their fast-paced cover of ‘Cherry Bomb‘. The nervousness had fully and clearly disappeared at this stage, the two vocalists emotively singing the chorus.  The Graduates finished their performance with the fitting iconic feminist anthem, “Rebel Girl”, which was undoubtedly their most confident cover of the night. Powerful chants of “Rebel girl, rebel girl” filled the air of the Oh Yeah. The Graduate’s performance tonight was only a small glimpse at their individual immense talent. A great start to this gig for International Women’s Day.

The next act on the bill was Gemma Bradley, who has her own distinctive style of contemporary R&B pop music. Originally from Draperstown and one of the youngest in Northern Ireland’s music scene, I first saw Gemma performing at the Scratch My Progress Showcase gig, who completely blew me away with her authentic talent, and did not disappoint either at the IWD gig.

Opening with ‘Rumours‘, the crowd immediately became captivated with her performance and moved closer to the stage. She continued her performance with “Stands Above You”, moving to “Waves” and “The Side.” With each song, Bradley continued to enthral the audience. Using only her voice and an acoustic, she filled every corner of the room. Then came ‘Hollow Heartbreak‘, one of my personal favourites, which emerged from the Scratch My Progress talent programme in the Oh Yeah Centre. A more upbeat song with a catchy tune and lyrics, it appeared to have every member of the audience both humming the tune and singing the riff. Gemma finished with ‘Berserk‘, starting off slow-paced but quickly picking up with a distinct riff. Judging by the sound of the applause, Gemma Bradley is going to continue to rise through the music scene. She is exceptionally talented and left the stage leaving a buzzing, positive atmosphere in the room.

Somehow, despite my usual excellent time management, I managed to miss the start of Sister Ghost’s set. Regardless, I re-entered to a contrasting atmosphere. I left behind a relaxed ethos but returned to a loud, energetic audience.

Shannon O’Neill, has been in bands since she was 12 and is strikingly proficient in performing. This became clear when I returned to the Oh Yeah. I entered in time to catch newest single ‘Backwards‘. The punk riff and thick bassline are enough to intrigue me to the front of the crowd. The chorus is seemingly dramatic with powerful percussion I could feel in my chest. “Bending over backwards for you” was left in my mind repeating for the next few hours.

Being the founder of GRSNI, she then took a moment to congratulate all the Graduates on their emotive performance, while encouraging the audience to move closer to the stage. ‘Her Mind’, like Backwards, also featured an intense punk riff. Boasting perfected guitar solos, the lyric “oh her mind is a delightful suicide” struck a chord with me. Shannon’s vocals are otherworldly, adding to the grunge vibe to the entire set. Finishing with ‘Scent’, the extremely loud, noisy track filled the air.

All the songs, but particularly Scent, have a heightened sense of liberation from all musical aspects. The sense of freedom is evident when Shannon finishes the track with a seemingly messy but sharp guitar solo on the floor. The full performance from Sister Ghost allowed them left the stage with a bang, Shannon’s punky grunge mark a contrast from earlier performances. Her performance

Although the International Women’s Day gig had ended, we should continue to celebrate the achievements made by the influential, inspirational and powerful women every day of the year, and not just the ones who performed on this evening. After all, the music scene in Northern Ireland and around the world would be completely lifeless without them.