by Marie Sauvé
in Music Reviews 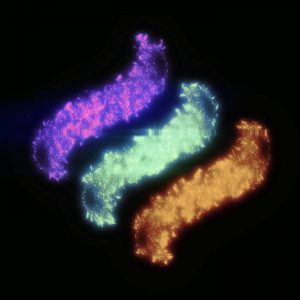 When I started my first listening of the EP, I was watching a video of a seal crawling on the beach to come close to the man who was taking the video and just trying to cuddle him. There is no connection at all between the video and CM88’s EP of course, but it just made me smile because the first track would totally work in a movie-documentary about animals.

V mixes quietness and aggressiveness in a very interesting way. The first track, Once Again (Part One) sounds like rainfall, half way between the beginning of Robert Miles’ Children and the soundtrack for the movie Angels of the Universe. As for the second one, Highway of Bygone Minds, it is in many ways similar to the said soundtrack.

This is actually what seduced me in the first place – a good few years ago, as I started university in France, the soundtrack for Angels of the Universe was the CD that I played morning and evening in my little 9m² studio. There was just something about that CD that I loved. You could listen to it while doing anything at all and it would bring you peacefulness no matter what. It is the sort of music that makes you feel like you are out of space. The sort of music I would picture in a movie like Interstellar.

The third track, E/X brings a galactic dimension to it, and it’s one of my favourite pieces. The electronic scattering of sounds reminds me of Daft Punk’s Giorgio by Moroder. The music makes you psychotic without destroying your ears. I must admit that Husk (Interlude) and Monotonous Wanderings didn’t seduce me too much, I found them somehow repetitive. There are more sound effects, more electronic complexity, but all in all the melody stagnates.

BTSA brings a new melody and you will surprise yourself whistling it and shaking your head as it plays. However, it is really New Horizons and Into the Void that caught my attention, undoubtedly because the radio transmission gives it a Public Service Broadcasting touch – and PBS is one of my favourite bands.

Finally, Once Again (Part II) is a beautiful way to leave the EP. It may force a bit too much on electronic sound to my taste at times, but it is peaceful, adds a final galactic touch before accompanying us back to the raindrops in the quiet music of a piano.

All in all, I liked V, it reminded me of a lot of nice musical things that I had forgotten or just stopped paying attention to. I think it could have survived with only six tracks but I’m sure some people will be more convinced by certain pieces than I was. I recommend that you listen to this EP when you’re in the dark, so that you can fully appreciate the galactic dimension it displays.

And So I Watch You From Afar – Successors