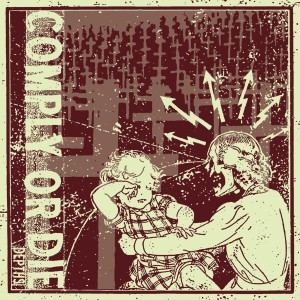 Comply Or Die, a raging monster of a musical beast are a Belfast/Bangor based band formed back in the spring of 2008. They have released their 2nd album called ‘Depths’ which was originally first released on the 5th of September 2011. This is an album indeed worthy of that title.

Kicking off at a fast pulsing rate with loud distorted bass and kick-rolling thunderous drums, the band ‘Therapy?’ immediately come to mind. For a 3 piece consisting of Michael Smyth on guitar and vocals, Ian Pearce on bass and vocals and Matt Crothers on drums, this is a loud musical creation that needs to be heard. This heavy sound was made for a live set in mind. In fact the whole recording process could easily of been recorded live with their distorted rough around the edges tone set in place here.

It is a little repetitive at times, but by the end of the album their progressive nature plays to their experimental favour. The interplay between the drum and bass is bold and confident, the guitar tones are expressive and catchy and the vocals are punky, a little whiney at times, but eccentric. There is a lazy vocal delivery in a couple of their songs but this works in favour of their grinding raucous grunge sound. It’s probably to their taste and it is the sound they want, but it’s just not always to my liking. I would much prefer it if their vocals where delivered stronger because their music is so strong. I am a little curious what kind of progressive rock song they could create with a slight change of singing style.

Track number 3 ‘Tetsuo’ reminds me of ‘The Distillers’ sound, especially with that guitar lead complementing the experimental drums and distorted voice. It has that roaring ear splitting feeling to it as if it’s made for beating fists against someone’s face who has seriously done you wrong. Halfway through the album the song ‘Vermin’ is where things start to really get more interesting. Starting off with a Pink Floyd experimental vibe using squeaky clean guitar lead on reverb and dooming bass lines on distort to grind their way through the song. This has 11 minutes of interesting interplay between all the instruments, breaking down each instrument one by one and throwing it back in our faces.

The last song ‘DMT’ really sets the tone and raises the bar exceptionally high for an interesting end to this progressive rock album. It is the stand out track. It is a fully instrumental track with more to offer within the melodious soundscape. The squeaky reverb guitar lead reminds me of the band ‘Explosions In The Sky’ for a few capacious moments. There is even a Djent vibe going on halfway through this adventurous 12 minute instrumental song. This is a really impressive scope of sound within each passing minute that is worth listening to on a very good set of bassy headphones. Every time I listen to it I discover something different. I think if there was any singing on this track it would spoil the mood. Which paves the way forward to question, which direction will they take next? To the experimental complex nature of this band there is no reason not to expect big things from this band now and towards the future.