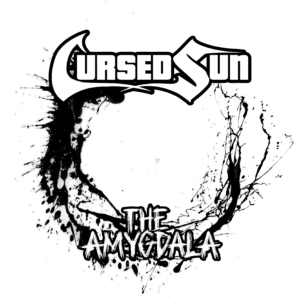 The last time Chordblossom reviewed a Cursed Sun release (2014’s The Fall and Rise; you can read it here) we noted that these scene stalwarts were “becoming heavier and more polished with each release” and that they were definitely “capable of evolving”. Two years on and with a new EP due for release – the intriguingly named The Amygdala – has that desire to expand artistically directed their sound once again?

The title alone certainly points to a potentially intelligent and intrepid creation: an anatomical term for a part of the brain that deals with memories, decision making and emotional response, it proves to be the loosely binding theme of the EP. Opening track ‘Breeding From Bleeding’ begins with a furious bellow from frontman Andrew ‘Jones’ Cassidy, before immediately hooking the listener with a deep, bass-heavy groove. It’s somewhat abstract lyrically, but appears to discuss the modern obsession with plastic surgery and vapid fame – turning people into metaphorical ‘zombies’, as it were. The harshness of the lyrics blends perfectly with the blasting, thrashy riffs throughout.

‘Cataclysmic Decline’ is less abstract: dealing with the aftermath of nuclear war, it talks of “the listless left to fend for themselves” and “world extinction”. It’s a chugging, vehement number with definite shades of prog metal and even djent in its tricky time signature changes.

The title track is next, and this time there’s no mistaking the subject matter of night terrors. An anguished Cassidy tells the listener about the “Shadow Man” who invades his nightmares and leaves him “Screaming, my voice breaking like silence again, thinking I’m dead”. It’s a slow burner of a song, and throughout its six and a half minute fear-filled journey it packs a guitar-snarling, riff-filled punch.

Then it’s time for full-on thrash metal with ‘Primordial Chaos’, with its creepy, spoken word intro and headbang-y racing beat. With lyrics that seem to speak of embracing the darkness of psychosis and violence, it’s a deeply creepy yet commanding and forceful tune.

Wrapping up the EP is an alternate version of the title track, and what a version it is. Eschewing the rough and tumble of their usual metal sound, this is an acoustic take on the song, complete with clean singing, stringed instruments and an eerie, almost theatrical feel that’s reminiscent of Seventies prog rock. It’s a bold step which shows an utterly different side of the band, but it works brilliantly.

So the answer to that earlier question is yes, The Amygdala most definitely proves that Cursed Sun are not afraid to evolve and make some provocative decisions when it comes to their music. For a band coming up to their tenth anniversary that’s no mean feat. Top job, fellas.

Atlantic Sessions Returns With A Stellar Programme For 2016