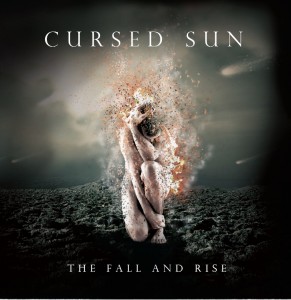 With a wealth of new bands currently flooding the Northern Ireland metal scene, it’s sometimes nice to check in with some of the old hands. Take for example metallers Cursed Sun, who have been around for an impressive seven years since forming in summer 07 by vocalist Andrew ‘Jones’ Cassidy and original bassist Bryn Boothby. Since that time they have lost both Boothby and former drummer Paul ‘Pablo’ Houston and gained Matthew Montgomery (in 2013) and Chris McMullan (in 2010) respectively.

They have also released an equally impressive two EP’s – 2009’s As Seen Through the Eyes of the Dead and 2010’s No Order In Existence – and a full length (Premonitions) in 2012. This autumn saw them add to their list with new EP The Fall and Rise.

The band describe themselves as ‘deathy thrashy stuff’ and cite influences such as Lamb of God, Gojira and Mastodon. This EP certainly confirms that! The EP opens with the short, sharp fury of ‘The Seven’ – from its wailing, doomy intro to its rapidfire double bass and riff combo and growly lyrics, it has ‘deathy thrashy’ written all over it. Its disdainful lyrics which speak of corruption and greed demonstrate a steely intelligence not always seen in this genre – there are definite shades of the aforementioned LOG and Gojira here.

Second track ‘Psychopath’ does exactly what it says on the tin, with lyrics full of cold rage and diabolical plans underpinned by a grinding thrash sound. At seven minutes long it’s quite an epic number, but its twists and turns save it from overstaying its welcome.

Unexpectedly, third song ‘The Last Rites’ tumbles out with a real blast of punk venom. Thrash-punk? Its thunderous pulsing riffs and pounding cymbal-led drums, combined with defiant lyrics (“Bait me, fuck you, try to rape my mind and you’ll fail”) are drenched in punk attitude yet equally scream ‘thrash’. An intriguing number, for sure!

The EP closes with what is indisputably the highlight. ‘Ascension’, with its slow, scene-building intro, odd time signatures scattered throughout and ‘loud/quiet/loud’ pattern demonstrate the band’s love of proggier acts such as Mastodon, whilst still retaining death metal-like heaviness. The lyrics – which again talk of corruption and power, this time with a Faustian-type deal thrown in – complement the atmospheric feel of the song perfectly. Pounding drums, superb guitar solos, a song full of ebb and flow…brilliant. The outro alone is magnificent:

“You bleed war
You bleed regret
You bleed revenge
You climb, you ascend
No boundaries
Stripped back to nothing
Immortality”

And then – abruptly – it’s over. It’s a bleak and powerful ending to the song, and indeed the EP.

Cursed Sun have been slowly but surely climbing the ladder, and The Fall and Rise will undoubtedly allow them to jump a few rungs. They are becoming heavier and more polished with each release, to their fans’ delight. They’re hardworking, pay their dues, tour often and have shown that they are capable of evolving. Who knows how far this work ethic could potentially take them – certainly farther than as veterans of the local scene, surely.

The Bayonettes – ‘A Small Step To Greater Heights’