Dog Will Hunt – The Colours 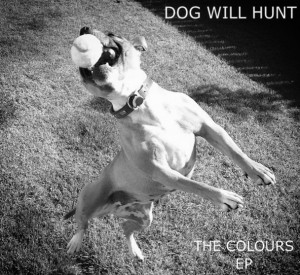 If I could write this review by simply saying ‘just buy it’, then i would. However i believe it’s my job to sell it to you. Hmm, why should you listen to this? Let’s start by seeing who Dog Will Hunt are.

The north coast has produced some awesome bands as of late and Dog Will Hunt are the latest who fall into the hardcore sound. Described as a mix of Fugazi meets Hundred Reasons, this had me intrigued from the get go as I love both of those bands. I was not disappointed. The band formed around two years ago and have so far released the EP ‘Here We Are’ which had 3 songs, 1 of which featured ASIWYFA’s  Rory Friers. This time around we are given 5 songs, 2 are short instrumentals which start and segue the EP into wonderful places.

‘Destroy The Walls’ is the second track which hits you with it’s wall of sound from the start. Filled with interesting time signatures and drum beats, the bass and guitar compliment each other perfectly and keep you wondering where it’s going to go. ‘Build A Fortress’ has ‘Hey Hey’s & Woo’s’ which are certainly going to be a live favourite amongst fans. Catchy and intense, thoughtful and urgent, this is definitely one of my favourites. ‘We Are The People’ is the final track. A song that boasts an epic performance, choir style vocals that give way for the delicate end. 5 songs clocking in at 11 and a half minutes.

By the time this goes up, the band will have already played Tweed Fest with Axis Of , Lantern For A Gale and many more. In good company, they will definitely earn some new fans. A fellow reviewer at Chordblossom said “Dog Will Hunt have a very bright future ahead of them and I strongly advise you check them out”.  I can’t agree more.

This dog has teeth.

Selene – Among the Frozen