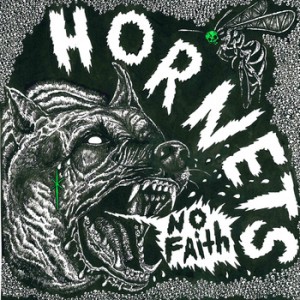 Aggressively groove-laden is perhaps the best term to summarise Belfast-based four-piece, Hornets. In order to celebrate their latest release (which is undoubtedly worth said celebration), No Faith, saw the band take their explosive live set up outside of Ireland for the very first time in order to play a series of extremely well-received shows in England.

As is exemplified throughout their new mini-album No Faith, but particularly in the opening track, the blisteringly heavy ‘Stay Free’, Hornets have truly succeeded in surpassing the lazy “post-hardcore” label they have been slapped with for so long, and with this release are firmly cementing their stake in doom-influenced, hard metal territory.

Redolent of early Napalm Death, with James McAuley’s frenetic vocals, Andy Sheils’ and Craig McCloskey‘s calculated dual riffs capable of registering on the Richter scale, and Richard McAuley‘s powerhouse drumming, (with his double kick pedal getting more than its fair share of abuse). ‘Advice’ is a stoner-tinged auditory assault, with its successor, ‘Jehovah’ asking the listener scathingly “Now that the dust has settled/Dig deep inside your souls”, managing to provoke both more groove than its namesake, and minus the unwanted copy of Watchtower magazine.

The ominously bruising ‘For Always’ is darkly thunderous in tone, and with McCloskey‘s bass working overtime amongst all the other wonderfully chaotic, gloom-inspired musical elements, it is somehow reminiscent of Houdini-era Melvins, which is only ever a positive comparison to be able to draw. Closing the EP on a menacing note, ‘Behind Me’ is verging on anthemic, with its slower, sludge-driven pace that still manages to deliver high-octane heaviness without compromising- this bodes well for Hornets, proving that they are highly cogent of their musical capabilities and aren’t afraid to give the traditional boundaries within metal sub-genres a good, hard (and much-needed) shove.