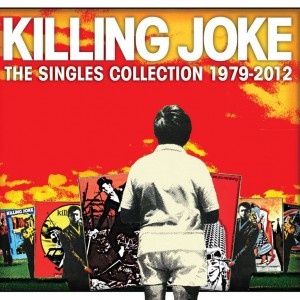 Initially maligned by an uneducated music press, Killing Joke have produced a body of work which stand as the greatest pieces of music recorded by anyone.

Based around the casually apocalyptic sound of Geordie Walker’s guitar, Jaz Coleman’s vocals (which alternate between riot inciting, sneering and heartbreaking) as well as a rhythm section dedicated to getting you to dance while they tear out your internal organs through the low end, this band have been a fixture in the musical consciousness for the past thirty years.

This is the first comprehensive collection of all their singles. Being in chronological order, the listener is transported through a history of British underground music, ranging from funk, post punk, new wave, goth, synth pop, industrial, dance and metal. When most bands attempt to change their sound, they often come off as band wagon jumpers. Killing Joke still retain their idiosyncratic sound throughout all these changes.

For this writer, hearing these songs out of album context is a reminder of just how thrilling it was to hear them for the first time: ‘Nervous System’ is still deranged, ‘Requiem’ is the song to play after the bomb drops and ‘Follow the Leaders’ is still all too apt these days.

Non album singles like ‘A New Day’, ‘Me or You’ and ‘Birds of a Feather’ demonstrate that there was a pop sensibility that could allow the band to bring the mainstream closer to them. And, with ‘Love Like Blood’, they succeeded. But at a price.

The much maligned ‘America’ and ‘My Love of this Land’ singles actually benefit the most from being in this compilation. The album they are taken from, ‘Outside the Gate’, is often derided by KJ fans as the moment the desire for mainstream recognition overtook Coleman. However, ‘America’ still retains the cynical commentary evident on their early work. ‘My Love…’ is a beautiful and haunting single.

The second disc, covering 1989 to the present day, speeds by with the varying styles. Truth be told, these songs work much better in the context of their respective albums. ‘Democracy’ is the perfect example: a half acoustic/half loud scream of despair, it is not a single. But it is a powerful number. Recent songs like ‘Ghosts of Ladbroke Grove’, ‘In Cythera’ and ‘Corporate Elect’ are evidence that this band are not finished by a long shot.

For long time fans, the third disc of rarities is the main attraction. The unreleased tracks have their moments (‘Timewave’) but it’s easy to see why they didn’t make the final cut, as they’re merely serviceable. The b sides/soundtrack numbers are much better: ‘Our Last Goodbye’ is a tribal and stirring hymn to old friends and why ‘Drug’ was wasted on the Mortal Kombat soundtrack is a mystery.

This collection will be an awful lot for first time listeners to Killing Joke. They may find the change in genres a bit too much, and some of the songs only make sense in the context of their own albums (‘Follow the Leaders’, ‘Hosannas From the Basement of Hell’). But give it time and you will never be the same.

You will realise that everything you’ve been listening to previously is nothing more than a distraction from what’s going on in the world and in your soul. You will view the world in a different light, and you will feel your record collection thank you for your astute purchase.

Greatest band of all time? No question. Get the albums first, then pick this up.

◀ STANDOUT ⁞ All Of Them ▶
◀ SOUNDS LIKE ⁞ Public Image Ltd ▶