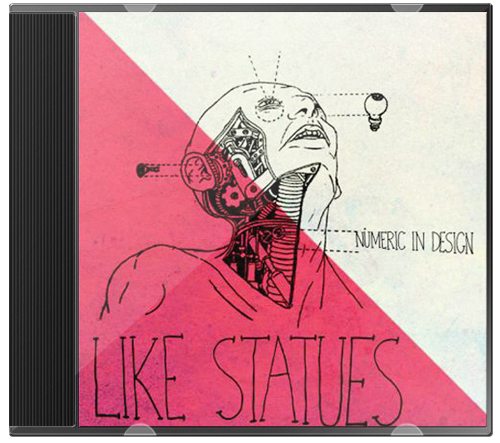 In a scene as small as our own not many bands will slip through the cracks. If you are an out and about gig goer it is most likely that you have in fact seen most of the up and coming bands from the area. Unfortunately, for me, Like Statues were one of these bands that just slipped through my fingers and I have, as of yet, not seen a full live set. However, i am excited to listen to this before it has even begun.

‘Numeric in Design’, released January 2010 is a five song EP by the Lisburn quartet. The mix of brutal force and delicate melodies makes the band stand out from every other ‘experimental’ or progressive band. Songs such as the first single and opening track, ‘The Great Waste of 1609’, grab you by the scruff of the neck and pull you in, ultimately, leading up to the explosive conclusion. ‘Fracture the facts’ however has hints of Incubus and occasionally a twang of Fighting With Wire and Soundgarden. Beautiful harmonies make this song, although a drawn out instrumental had me a little bored. In comparison to the opening track it seems as if the Punch is missing from the final mix of the song and it doesn’t jump out at you. What had the potential to be single number two ultimately turned into a filler track.

Although a little deflated by ‘Fracture the facts’, Like Statues do deliver what has to be said is an impressive and promising debut EP. Intricate guitar and drums, pumping bass and soaring vocals accompanied by beautiful harmonies mix well for any occasion and Like Statues delivered all mentioned.

◀ STANDOUT ⁞ A Journey to Speak of ▶
◀ CONNECTION ⁞ Fighting With Wire | Oceansize ▶