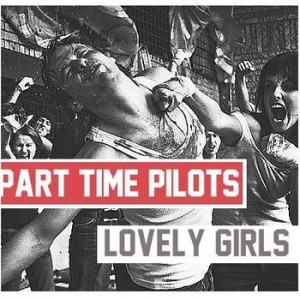 ❝ Caution! Anybody who has a hankering for existential lyrics, complex time signatures and overly produced tunage, you are in the wrong place. Omagh’s Part Time Pilots specialise in pure punk rock; if that sounds more your ‘thing’ then read on.

Claiming to be “sick of what’s on the radio” (hear hear!) and citing several punk rock bands as influences, the as yet unsigned band describe themselves as ‘alternative punk’. Despite only having been around for just over a year, they have already built up a solid following and ‘unofficially’ released two CD’s. Their first ‘proper’ release is this eight track EP, Lovely Girls.

The EP opens with ‘Hunting Season ‘, all jaunty guitars and early Green Day-sounding three chord punk rock. There are also shades of The Clash in singer Enda McCrory’s vocal delivery, as well as the ever-enduring legacy of local heroes The Undertones. The lyrics revolve around pulling on a drunken night out (“leave yer morals at the door cos it’s fucking hunting season tonight”), a theme that proves pervasive throughout much of the EP. In fact, the very next song, ‘Seven Missed Calls’ could be considered to be part two of the first track, as it deals with the aftermath of said drinking and pulling. There is a touch of ska punk here too, a la Less Than Jake.

Track three, ‘Light Switch’, is about…yep, you guessed it, drink and sex! It’s becoming clear that the EP’s cover artwork neatly encapsulates the album (so don’t say you weren’t warned!). There is however a change in the next song, ‘Jack the Lad’, with its Southern rock flavour and story of an unwelcome guest at a gathering. The refreshing use of local slang in the local accent results in some delightfully witty lines, such as “blow it out yer arse big man!”

‘Punk Song’ is…well it’s pretty self-explanatory isn’t it? Detailing the perils of starting a band, it has a racing punk beat and a rocking guitar solo, and must surely incite mosh pits at any PTP gig. This is followed by ‘Drop the Hand’, another now-familiar ditty of wine, women and song. Another self-explanatorily titled number follows, ‘Dance Fucker Dance’, which amusingly paints a picture of what passes for smooth moves once people are, ahem, slightly inebriated – again with that Southern rock influence.

And then just when you think you’ve got PTP’s number…they throw out a curve ball. Final track ‘Lovely Girls’ is quite a departure, with its jangly rock guitars, more mature sound, and a definite bluesy vibe. Even the lyrics are in a different vein, speaking with a melancholy air and a touch of bitterness of a lost love. It’s an unexpectedly touching number that hints at hidden depths beyond the simplicity and joviality of the rest of the EP.

This EP is thoroughly enjoyable, and highly recommended if you’re craving a slice of good old-fashioned punk rock. It won’t change your political views, or make you frown about the state of the world. It doesn’t lecture or preach. Instead, the possible side effects include smiling, head-nodding, foot-tapping or even drunken shape-throwing. Less ‘dreary’, more ‘beery’. Heh.❞

Crowd Footage at One Big Weekend 2013