They will tell you ‘Rock is dead’. They will tell you ‘guitar music is dead’. They will tell you ‘there is no such thing as new music, merely old music recycled’. Who are they? Well, the industry itself seems more interested in re-issues and making money out of established artists than breaking new artists, especially if those artists come as a band – the more members, the harder to package/control and finance during those initial salad days. The media too wants to have artists created by its own TV shows. Competitions create (false) drama, feed our prurient, intrusive need to hear a sob-story to know whether to ‘like’ the artist as a person before we even begin to decide whether they are any good or not. Oh and it’s really handy that we get to enjoy/endure hearing singers singing a multitude of cover songs, the rights to many of which just happen to be owned by the person behind the TV show in the first place.  They are the battery-farm song-writers they have in waiting to pen the oh-so-finger-on-the-pulse-of-popular-culture hit song for that one album the winner will release before they are dropped in time for next year’s winner…and repeat ad nauseam. Just read Dave Grohl’s ‘music as a competition’ rant and you’ll know where I am coming from.

The counter-argument that talent will always win through, is not valid enough. People have to eat; and if the means to earn enough to eat through your music is removed or denied and talented people have to do other things to eat that take them away from their music (or take them down the wedding band route), it is a major barrier to success. It’s not even about being No 1 and making millions, I am talking about being successful enough to have some sort of decent standard of life, to be able to continue to create new music, and not just be a cabaret act, cover/tribute act. Reading about bands  that you figured were doing ok, giving up because they just could not make ends meet is becoming a depressingly frequent occurrence. At times you wonder will another Muse or Arctic Monkeys ever break through?

I (as do my CB colleagues) unashamedly champion local music because we believe we have bands/artists here in O.W.C. that are as good at what they do as anyone. I accept that some of those bands are derivative or ‘NI’s version of…’ if you will. But we also have bands/artists here that are pretty much unique. I can understand why ‘derivative bands’ may get overlooked but surely someone has to get a hold of one of our unique bands/acts and get them heard nationally/globally? And, at the top of the ‘tree of uniqueness’ for me is R51.

The only pigeonhole suitable for this Belfast-based 5 piece is ‘un-pigeonhole-able’. Even saying R51 is ‘alternative’ does not really do the band justice, because there is so much music out there which labels itself ‘alternative’ that it has almost made the term meaningless. But if alternative held true meaning for any band it is R51. For me this band is up there with the true innovators in music, like Radiohead, Muse, Arctic Monkeys, Faith No More, Arcade Fire; bands for whom experimentation is normal, not some affected chic.

The skill of R51 is to create a body of music, of which the 5 songs on the ‘Pillow Talk’ E.P. are just the latest installment, that is amazingly varied and yet, you know it is R51. That’s tremendously clever. There are common threads that tie it all together. Melyssa Shannon’s Kate Bush-esque vocals are dreamy at times, yet still have that cutting edge when necessary.  This is a young lady who gets better with every release but I still think there is more to come from her in terms of consistency of delivery. The lyrical content has a bizarrely ethereal-yet-real quality (yes, I know that is a contradiction). There is cohesion to the music, be it fret-board magician’s Jonny Wood’s work, the tight rhythm section, or clever use of modern technology, especially to the fore in the unashamedly dance-inspired ‘Absolutely Nothing’. To sound cohesive while covering a myriad different genres from house music to thrash metal takes some doing. But R51 pulls it off with ease. It speaks of a band of much greater years than these still-young musicians. The production is just mind-blowing considering it is self-produced.

Not all music is art. There’s nothing wrong with the music that isn’t art; music to dance to, to rock out to. Nothing to be ashamed of. Music is many things to many people and rare is the person who only listens to one type of music to the exclusion of all others. I love many bands whose music I would not call art, but I also need bands in my life that push boundaries, who refuse to same to plow the same furrow as everyone else; hell, that even refuse to plow any straight furrow at all. I’m even prepared for such bands to release songs, even whole albums that I don’t like, but I still admire them for their bravery. R51 is one such band. These 5 intrepid sonic explorers are national treasures or should be. We should all be doing what we can to push them as hard into the national consciousness as possible. This is a band that could write an ‘Ok Computer’ people. This is band that is more than just verse-chorus-verse-chorus, yet it still has hooks in the songs. This is band that has a concept of what it is; that has artwork that again sets the band apart and makes them stand out among the crowd.

You will notice I have not done the ‘song run down’ type review; not described each of the 5 songs in detail or in order. This was deliberate, because only a fool would try to encapsulate in my limited vocabulary what this fantastic band is and does. You just have to find out for yourself. Record companies, this is a band that doesn’t need a development deal, does not need some Svengali producer to bring out of it what it doesn’t know it has, does not need an image consultant, does not need to learn to play its songs live. R51 is the finished article, dues paid, all boxed up and raring to go. What are you waiting for? 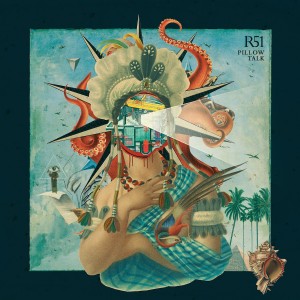