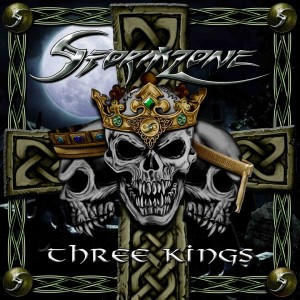 We have three bone fide world class Heavy Rock bands in this country at the moment – Million $ Reload, Trucker Diablo and Stormzone. These are bands that can stand toe-to-toe with any of their contemporaries from across the globe and not suffer by comparison or feel in any way inferior. The only thing stopping any of them from ‘going global’ is the state of the music business itself, which is treading water with record companies reluctant to invest in new talent. Bands have to do the hard yards themselves and Stormzone has definitely put in the hard yards. The guys in the band have sacrificed personally for their music, believed in their music, backed themselves and now, have delivered what hopefully will prove to be the final piece of the puzzle  – an absolutely top class album.

But let’s get any possible detraction out of the way first. Yes, Stormzone are a Heavy Metal band; proud of it in fact. They are heavily influenced by the New Wave of British Heavy Metal bands like Saxon (who they supported only last month), Judas Priest and in particular, Iron Maiden. They have the dual guitars, they have the operatic wailing singer, they have the songs about war, death, history etc. The opening moments of album opener ‘The Pain Inside’ even feature a Churchill speech, an idea which Maiden used on ‘Aces High’ and I expect those who wish to snipe, will use this against the band. But if that’s the case then there are many bands out there that have got away with worse. There are also a lot of the seminal bands out there that haven’t written a good song in ages and trade on their back-catalogue, ‘greatest hits’ tours and merchandising. Some would say Iron Maiden themselves could be accused of that. So let’s judge ‘Three Kings’ against others in their genre and base that judgement on how good the songs are, how good the performances are and how good the production is.

This being so, ‘Three Kings’ is a masterpiece of Heavy Metal. Thirteen songs that exhibit all that is good about Heavy Metal. Absolutely huge, punchy riffs, interesting changes and arrangements, blistering solos, a blockbuster rhythm section, massive choruses and, to top it off, a singer in John ‘Harv’ Harbinson who is as good as any Metal singer you could mention. He has the lot; power, range, the wail, the scream, all the attributes the top Metal singers, Dickenson, Tate, Halford, Byford etc. have. But it’s not just all screaming and wailing like an air raid siren, Harv maintains fantastic tone throughout his range. ‘Beware In Time’, for instance, the album’s only ‘ballad’ features some of the best singing you will hear from anyone and has a genuinely wonderful melody, not a collection of ‘big notes’ with nothing in between. It is a God-given (or Lucifer-given depending on your view) talent Harv possesses and he deserves to be recognised as a top exponent of his craft.

But it would be wrong to say Harv carries the band; he is the icing on a splendid cake. Davy Shields and Steve Moore between them have come up with some bone-crunching riffs. The album’s second song, ‘Spectre’, features a main riff that would not be out of place on an early Metallica album, while ‘Wallbreaker’ is the best song riff Anthrax never wrote – to name but two. The pair also exhibits an ear for the dual guitar harmonies made famous, first by Thin Lizzy and then latterly by Iron Maiden, as shown by ‘The Pass Loning’ for example, which has a distinctive and welcome celtic feel. And then there are the solos. They are many and varied, featuring frenetic runs and dextrous fingering, always fitting both in terms of the song arrangement and the musical signature with the odd curveball thrown in for good measure. I particularly like the extended solo in ‘Heart of Stone’ and the harmonised solo in ‘I Am The One’ is as pleasing as it is unexpected.

The other star of the show, no disrespect to the fantastically tight rhythm section of Davy Bates (drums) and Graham McNulty (bass), is the production itself. Metal production can be a hit or miss affair with a great many careers foundering on a lack of good production while other, perhaps less talented, bands prosper through studio enhancement. ‘Three Kings’ has nigh-on perfect production for a Metal album. There is a perfect balance of all the instruments with Harv’s vocals beautifully bestriding the lot, and the correct balance between raw natural power and a clean crisp sound. It reminds me of the production of Queensryche’s ‘Operation Mindcrime’ or Maiden’s ‘Killers’. Considering the whole thing was self-recorded and self-produced, it is an amazing feat of self-reliance – another of Stormzone’s many strengths. They also designed the cover themselves.

And what of the oft-criticised lyrical content of this, a Heavy Metal band? Well, yes they don’t completely break the stereotype, there are songs about war/death. There’s a bit of sword and sorcery in the title track, there’s some sci-fi and we even have a song about Heavy Metal itself in ‘B.Y.H.’ (Bang Your Head) which, I have to confess, is a bit much for me, but will probably become a live favourite. But to counter-balance these more predictable themes, there is ‘The Pain Inside’, a song about Post-Good Friday Agreement Northern Ireland, where hatred still exists, passed down to newer generations who should be free of the divisions of the past. ‘Heart of Stone’ is about a relationship break up, ‘Out of Eden’ is about world politics through the ages, ‘I Am The One’ is about mental illness and ‘Beware in Time’ is about someone suffering in silence. So, there is plenty there to slay the myth that Metal is one-dimensional.

It is a sign of a good album that I found it difficult to choose a standout track as there were so many candidates; ‘The Pain Inside’, ‘Spectre’, ‘Alive’, ‘Beware In Time’, ‘Heart of Stone’ were all vying for that spot. After the final track finished, I wanted to listen to the album again – another good sign.  I would by lying if I said I am dyed-in-the-wool Metal fan. Many Metal fans view Metal more like a religion. If so, then I could be described as a ‘lapsed’ believer. But even so, I would be very surprised if the dedicated Metal press/media are anything but universally blown away by this superb release. That being so, if there is any justice at all in the music industry, this album should catapult Stormzone into the big leagues. We should be very proud to call them our own.

‘Three Kings’ is released on the Metal Nations label on July 22nd and the band will then tour Ireland and then mainland UK, beginning with the official album launch at The Diamond Rock Club, Ahoghill on 27th July.

◀ STANDOUT ⁞ The Pain Inside ▶
◀ SOUNDS LIKE ⁞ Iron Maiden ▶