The Left Backs – The Morning After The Night Before 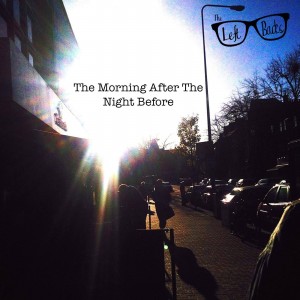 Given the Indie revolution/ New world order that was established by Arctic Monkeys and Razorlight back in the early days of the new millennium and prolonged by the arrival of such bands like Foals, it is always strange to receive an indie band that surprises in a good way. The Left Backs do just that, and they do it without sounding anything like The Strokes. No, really!

Fresh of the release of their New EP The Morning After The Night Before, the young band cops themselves a swagger and sound that suggest experience beyond their young age (having only formed in 2013), with songs and themes that give a reassuring sense of familiarity without cut-copy and pasting riffs and lyrics, a pit fall that many young bands usually fall into. The Left Backs, although borrowing heavily in influences from the pro’s (who doesn’t), maintain a feeling of electric originality and freshness that is guaranteed to have your fingers drumming and your feet tapping in the first 20-seconds of each single. The EP takes you on a trip through what its like to have a few nights out as a teenager in Belfast, with an initial criticism of the following singles being the somewhat unoriginal song ideas. However, in all seriousness, what straight warm-blooded male doesn’t think about girls or drinking on a night out?

First single ‘Better man than I’. Jaunty riffs evocative of early Arctic Monkeys (See ‘Mardy Bum’ and ‘Riot Van’) abound for two and a half minutes of Indie-rock pop, with references to Belfast drinking game ‘Kings’ and a street brawl rounding out the verses. You’ll find your head almost involuntarily swaying to the beat for the duration of the vibrations. So far, so good.

Next on the list comes the Razorlight-esque and alcohol soaked ‘Drinks for Two’, a three minute long tune of angsty teenage regret over a forgone ex girl. (we’ve all been there) Coupled with the smoothest vernacular you’ve heard in a while, this single sounds like it will fit on any commercial radio breakfast show and is just the thing to get you off your feet and out the door. Or comfort you as you sink deeper into that Jack Daniel’s, your choice.

Next on the list comes a subject insure we’re all familiar with: Fake ID. In what can be seen as the start of a theme here, singer Ben Watt-Doak purrs forth the sexual tensions of any minor trying to impress members of the older sex, using a Fake ID to “get in all the clubs, get served at all the pubs”. A catchy three minute tune which practically screams ‘Undertones’, The Left backs act as a beacon of hope for all those out there hoping to impress their Upper sixth dream girl, before the harmonies of the breakdown drive home the truth we all know “I won’t be good enough for you”

The lads continue to impress with next single ‘Let Me Be Your Man’ where they get their Fratellis on with a tale of an increasingly desperate attempt to woo the singers drunken nocturnal heart throb. An invigorating opening riff and thick, meaty chords portray the frustrated (at the in-so-far failed one night) ballad, which has your feet tapping in seconds before Watt-Doak’s snarl hits your ear drums a slap in the face. Its hard not to hear the Feargal Sharkey resemblance in the vocals and the lyrics, but thats not exactly a bad comparison.

Although it’s still the same EP, there is still a sense of growth by the time you reach ‘Monday’s Never Late’, which combines the feeling of fruitless futility of a desk job with the lyrical prowess of a young pre-quiff Alex Turner. Taking the view of aforementioned desk job from the perspective of a young female, ‘Mondays…’ delivers the same type of confused feeling you get once you realise ‘Town called Malice’ isn’t a happy song, with a truly entertaining solo at the two and a half minute mark that leaves you wanting more. A catchy chorus with an ironically up-beat rhythm leaves the listener sad that the vibrations have ended.

Unfortunately for you head boppers out there, last single ‘Winged’ is all to eerily reminiscent of Snow patrol, and while not necessarily a bad song, seems out of place amidst amounts the other fluid and dynamic numbers of this EP. You cant help but get the feeling that they are over extending themselves by attempting to blend genres. Although the change of pace could please some listeners, purists and casual listeners get the feeling of detachment by the much slower tempo that unfortunately does not gel with the rest of this EP.

Having said that, there is much on this EP to be proud of and it can definitely be seen as a large step in the right direction for the band, who figure to have much success if they continue along this oath of improvement.

Metallic Elements: Defiance In The Strum Of A Guitar