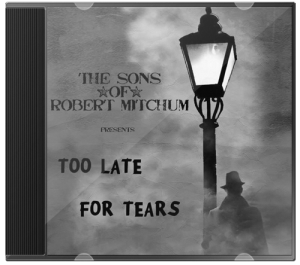 Where the hell have I been not to hear of The Sons of Robert Mitchum before? The more reviews I do for Chordblossom the more I am exposed to the breadth and depth of talent in our wee country. Sure, we have our share of copycats and wannabe’s but there are nuggets of genuine quality and uniqueness aplenty – and The Sons are one such nugget. This 4 song E.P. showcases a remarkable study in the fusion of raw Blues Rock and 1930’s American Noir. Moore’s brooding Morrison-esque drawl gives voice to dark storytelling a-la Waits and Cave to a backdrop of distorted guitars, tight rhythms and horns. I found it absolutely enthralling and quite unique in style to anything I’ve heard, certainly from a local band.

The E.P. kicks off with a monster of a song in ‘Build My Gallows High’. It’s epic, brooding, and raw and sets a scene of desolation. Check out the video on Youtube. It’s billed as footage of The House Band from Purgatory and that’s exactly the image it conjures up. A Zep-like riff, insistent menacing bass, eerie horns provide the canvas and Moore’s vocals (sponsored by Wild Turkey and Silk Cut) bestriding it all paint the Bosch-like scene – Absolutely essential listening.

‘David Contemplated’ staggers in like a deranged New Orleans funeral procession. Again, it exhibits noir storytelling of the classic Waits/Dr John kind. The thing that strikes me is the utter confidence the band exudes. This is shown by the sparseness and rawness of the sound, which the band seem to revel in not apologise for. The lyrics are the star of the show in this song with such unpolished gems as ‘and she was saying to herself, I’m no saint but I’m good enough for you’.

‘Darwin’s Nightmare’ starts off with a riff that would not be out of place on an Alice In Chains album: stark, discordant and slightly demonic. The words are stark and brutal and scare me more than any Slipknot song ever has and the music somehow feels heavier. The EP ends with ‘William Bloat’ which begins like a spaghetti western soundtrack but is set on the Shankill with the story of the errant Mr Bloat and his nagging wife and how she met her bloody end. Again, it’s great, macabre stuff.

I realise this is not for everyone. My wife overheard it and said ‘What the Hell is that racket?’ (What the Hell indeed). The rawness of the production and of the lyrical content may not be everyone’s cup of tea. But stuff tea, whiskey please…and leave the bottle….