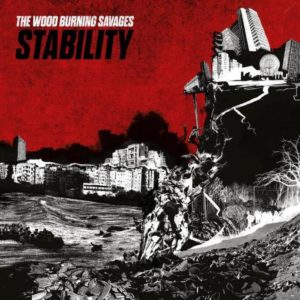 The Wood Burning Savages‘ debut album ‘Stability’ features boundless energy, modern sophisticated riffage and a bubbling ferocity that has it perfectly fit the mould of the modern era of rock. Produced by local sound engineer Rocky O’Reilly at the Start Together Studios in Belfast, ‘Stability’ is as short and serious as a miffed pit bull and is as intelligent and motivated as any punk album to come from Northern Ireland in years.

Avoiding the pitfalls of most debut albums, ‘Stability’ resits the comforting allure of repetition in its sound, instead of tackling issues that range from self-doubt, anger, the welfare state and heartbreak. Take the barely contained mania of ‘We Love You’. Like a soft drink that’s been shaken, there are elements of barely contained tension, bottled by the aggressive punky vocals and the unrestrained, driving percussion. Following closely and in the same vein comes ‘I Don’t Know Why I Do It To Myself’, which showcases Kasabian style arena-worthy riffs weighted with a heavy, stoned rage. The drums and guitars work in tandem to create impossibly large symphonies, while the snarling, dynamite vocals act almost as secondary elements of percussion, culminating in a relentless climax that cascades like a waterfall of Queens Of The Stone Age-inspired garage rock.

Moving on from the fury and energy, ‘Stability also demonstrates the potential to go off the beaten path. For instance, ‘Lusitania’ (named for the steam liner sunk by the Germans in WWI and generally seen as the catalyst for kickstarting American intervention) is a much slower endeavour, one in which strings are used to add depth and dimension. A spacious slow burner with a pace change that pushes the album back into overdrive. A soaring singalong with a chorus ripe for crowd intervention doesn’t just show that Wood Burning Savages can write for large crowds, but also that they plan on it.

This is corroborated by album closer ‘Freedom of Movement. At 6 minutes long, we see the Savages at their most political and malevolent. A ballad of quiet anger that explodes as the red mist descends amidst shades of Manic Street Preachers and Pulp, ‘Freedom…’ clearly illustrates that while anger is an energy, so is intelligence and the Savages meld the two perfectly on their final track. A political manifesto shrouded by tinny acoustics that confers a sense of unease akin to nails on a chalkboard, you can help but feel that its the closing track for a reason. Maybe because the band want it to stick with you, or maybe because its true.

‘Stability’ is one of the more impressive debut albums in recent memory from a band that sounds years beyond their time. Intelligent, ferocious, exciting and downright frightening at times, this is an album that should establish The Wood Burning Savages both locally and internationally.

Our Back Yard Festival Returns This Weekend

Watch: Travis is a Tourist – SOFARSOGOOD