Conor Scott is now a contestant on BBC’s The Voice UK after being picked by Danny O’Donoghue of The Script. Two years ago, Conor did his work experience at the Oh Yeah Centre. He has played two Volume Control gigs to date and has also performed as part of the Oh Yeah Centre’s acoustic picnic.

Ryan McMullan is an upcoming musician who has been dubbed as  “Portaferry’s young answer to Foy Vance has an ample sleeve that he has acoustically displayed his heart on” by BBC Radio Ulster’s Across The Line.

Hannah Butterfield is a young musician from Bangor with hopes of becoming a successful singer-songwriter.  She does open-mic nights around Bangor and plays quirky, upbeat songs rather than slow songs.

Lola Bingham is the 14 year old granddaughter of local musician David McWilliams. She recently performed his song ‘Days of Pearly Spencer’ at the Oh Yeah Centre.

Doors open at 7pm and tickets cost £5. Tickets are available from: http://www.wegottickets.com/event/218720
This is an all ages event. However, anyone under 16 must be accompanied by an adult. 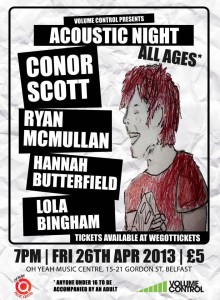