by Peter Cinnamond
in Interviews, Slider

Reared in the wilds of Co.Armagh Ciaran Lavery is a master in the art of somber songwriting and is highly regarded as one of Northern Irleand’s finest musical craftsmen. From his time in Captain Kennnedy to his current solo venture, Ciaran finds both beauty and darkness in isolation. Ahead of the launch of his new EP ‘Kosher’ Ciaran talked to CB about how things have changed.

► You have previous form in other music collectives before your recent solo material. Looking back, what do you remember as your first excursions into music?

Ciaran Lavery:  I started out in a three piece instrumental punk-rock band and we were hopeless. We were all at that age were nobody wanted to sing, so when we played all the covers which we did we’d be all sitting staring at each other hoping somebody would actually step up to the mic. But then after a year of playing Green Day in a garage – not singing – I joined Captain Kennedy. I was with them for just over seven years which feels like a long time now.

Sometimes I meet people and they say to me “My first gig was a Captain Kennedy show” or “I had my first drink at one of your shows” and you feel ancient! That band eventually ran it’s course and I’ve been playing shows solo for the past year and a half.

► How did you find your current sound and was it easy to transition into a solo artist?

Well I would still be really interested in punk music. I just think over the years I learned I couldn’t play electric guitar that well, haha. And I definitely can’t play punk!   I was always interested in folk music and have been surrounded by trad my whole life. I think it was all about finding my own sound and feeling comfortable with it.

During my late teens I would go to a lot of gigs and I would really study singer-songwriters to find out what worked for them. I always loved going to the gigs where the crowd was deadly silent. A show where even if somebody wanted to talk they couldn’t as whoever was on the stage had the crowd so transfixed they had no option but to listen.

Saying that I listen to the most opposite things. I quite like a lot of Hip-hop, but I don’t think I’ll ever start playing that.

► What would you describe as your main influences now then?

I have watched an awful lot of Tom Waits gigs and seeing him solo and seeing him as a band were quite similar as he brings the tone way down during both set ups and that seems to work for people. (Bob) Dylan is great, but people knew going to his gigs back then what they were in for, it was – song, clap clap, song – with complete silence in between. Not saying he can’t captivate a room now, but that kind of silence doesn’t happen as much these days. I would love to have seen Dylan before anybody knew who he was and see if he could do what he does now. I sure he could.

► As you produce music under a solo banner, do you plan to play with full band much?

I have been recently rehearsing with a band  and we’ll probably tour this EP a fair bit together. I’d like to spend most of this year playing with a band. You kind of miss the whole camaraderie of being in a band, plus if you make a mistake my yourself you’ve got nobody else to blame, haha.

► Quite a few emerging local singer-songwriters come from outside of the main cities. Do you feel your own hometown of Aghagallon just outside Lurgan has influenced your work?

It’s hard to know. I’m really proud of where I come from and I would attribute a lot of my songs to being about memories of home, and home for me is Aghagallon. So I suppose in that way it does shape the way which I’m writing and the content of the tracks. I definitely think it makes some of them more interesting hearing they come from a small town as it gives you an interesting picture in your head of where they are writing their songs.

► Is there a certain place where the sombreness in your music comes from?

I don’t think it’s a conscious decision. When I’m writing it just comes to me, like it comes from bones.

It’s perhaps due to the slower place at home, but then again people at home would describe my music as ‘depressing’, haha.  It just seems to be natural for me.

► Saying that, your new EP ‘Kosher’ is a much brighter affair. Why do you think that is?

Literally when we finished the album (‘Not Nearly Dark’) I consciously made an effort in my head to not go through that door again. It didn’t matter if it did well or not I didn’t want to recreate that sound. Everything during that recording was so quiet, but that was the idea going in. It was an experiment in how quiet it could be be.

But for this recording (‘Kosher’) I wanted to flip it on its head. The whole thing is very beat oriented. I wanted each song to make the listener tap their foot or nod along, all driven by a beat. The producer and I just took it from there.

► You released an EP of covers called ‘Other People Wrote These’ last year. Did working on these tracks in a studio have an influence on your new material?

I don’t think so. I try to keep every project separate and make so that people are able to differentiate them sound wise. If I put out the same thing each time I wouldn’t want to listen to it, haha. The covers thing was another experiment, this time in weirdness. I wanted it to be fully electric, no acoustic. Plus I really wanted to work with Joshua Burnside and Rachel Boyd.

I wanted to darken those tracks, to an extent. It was more of a side step away from my previous record and with everything I do I want to make sure I’m taking a new step in a different direction. 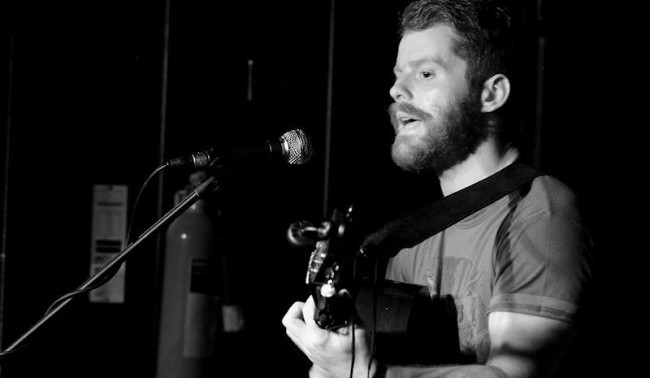 ► With that in mind what would you pin point as different your new release ‘Kosher’?

Everything’s written or drawn from memories from recent times or childhood. It’s maybe not as personal in the sense that I’m not name dropping people. But I do name drop places from home. I didn’t want everything to be dull and depressing, and it does have a much bigger sound. I’ve really like the contrast some people have when their songs are upbeat but the lyrics are deadly depressing. That’s why I’ve always been drawn to ‘Love Will Tear Us Apart’, people will dance to that song but it’s lyrics are bleak.

► Finally, how does your summer look on the live show front?

I’m still getting some festivals sorted out so I hope it’ll be a busy time. I’ve always been a bit afraid of festivals as I’ve never been to them much myself and I’m too afraid of half the people wanting to be there and half just wanting to be seen there. But I know I need to try them and perhaps I’ll gain an appreciation for them.

I can understand why people love them as there are some great festivals locally. I played Forfey with Captain Kennedy a few years ago and I loved it so I’m really happy to be going back this year. I’m sure it won’t be my only one. ◼