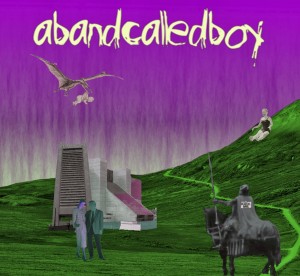 Self-described ‘hardcore fun power trio’ Abandcalledboy have been gathering fans left and right since forming in 2011. Their vigorous mix of alt-rock, noise rock and punk rock has resulted in some terrific singles releases, an EP (2013’s ‘Dead Academics’), and a reputation as a ferociously entertaining live act.

April 8th of this year sees the lads releasing their second EP, a self-titled beast which contains seven tracks. From the first notes of opening number ‘Another Meat Industry’ it becomes immediately clear that the addition of new bassist Mark Finnegan has invigorated the band and really helped them hone and clarify their sound. The song hits the ground running with a wall of piledriving riffs, while drummer/vocalist Ryan Burrowes alternately croons and disdainfully snaps the lyrics in a pleasantly husky voice that is slightly reminiscent of The Used’s Bert McCracken.

There are many highlights on this extended EP. Lead single ‘Cliff Richard’, with it’s hilariously cheeky ‘homage’ video and it’s cautionary lyrics which speak of those who live their lives vicariously though ‘slebs’ is a weath of riffs, quirky time changes and a rather brilliantly unhinged outro. Long time live favourite ‘Serotonin’ is also a treat, with its headbang-y riff and quite Nirvana-esque sound.

Other influences which pop up throughout are Biffy Clyro (time signatures, harmonised vocals), Sonic Youth (such as the slinky bassline throughout ‘Place of Dead Roads), grunge (quiet/loud/quiet song structure) and even Eighties bombast (most prominent in ‘Expect Less, Achieve More’, which has a distinct ‘Come On Eileen’ vibe, at least to this reviewer who is, ahem, old enough to remember the song when it was released).

The standout track is definitely the brilliant ‘Mirrorlover’. With its endless riffs (kudos here in particular to guitarist Adam Smith), langorous yet punchy vocals and quirks throughout, it is an unpredictable and exhilarating song which grabs the listener’s attention from the start and doesn’t let go. It is, in short, a damn near perfect rock song. Final track ‘The Trick Is In The Timing’ wraps things up with a frantic intro, non-stop wall of sound almost throughout (bar the temporary respite during the break in the middle) and a crash-bang-wallop ending which brings the EP skidding to a close. This will undoubtedly be a killer track live (looking forward to that!).

The entire EP is polished and shiny production wise, but still retains the ‘rough diamond’ charm of the band. The songs will fit comfortably into their live sets – in fact, they will probably become new favourites immediately. Abandcalledboy definitely put the ‘hardcore fun’ into rock n roll. This EP will without a doubt win them new fans and thrill old fans alike.