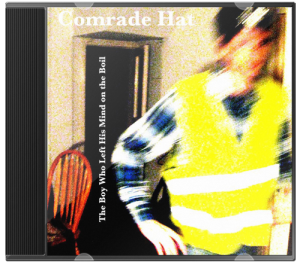 Named for the revolutionary chapeau he wore throughout school, Neil Burns has returned from electronic side project ‘False Relations’ with Comrade Hat’s first full album. The Boy Who Left His Mind on the Boil has been some time in the making since two EP’s going back to 2009 and an appearance at Glastonbury in 2010. Needless to say it has been worth the wait.

Sometimes a break is just what a musician needs and by expanding his musical horizons with False Relations, there is a smattering of synths and drops of psychedelic funk that are married perfectly with Comrade Hat’s eclectic yet more conventional jazz infused folk. With opening track ‘April Fool’ we are treated to Burns delicate falsetto mixed with bassy synths that at first glance wouldn’t seem a great combination but somehow it just works. Neither sound overpowers the other.

The successful mixture continues with the title track that is instantly comparable to Gary Numan’s early work albeit less robotic and with fewer staccato vocals. Burn’s composing skills are clearly on show here as lyrically the song moves at a brisk pace and is intertwined with synths and piano that allow the song end on a crescendo that never feels forced. Siobhan Sheils backing vocals help to add extra depth and weight to an already outstanding track. We head back into more conventional territory with ‘New Brighton Blues’ a dreamy and meandering love song stripped back with a few simple guitar chords and piano. ‘Old Brighton Blues’ keeps us at the seaside but with a refreshing summery feel that Brian Wilson once held a monopoly on. The synth used is very simplistic, which is just what this record needs. Over complicating a song that already has the huge benefits of Burn’s voice and clever lyrics. The production values of having a full band roster are also prevalent throughout. There is a real plethora of sounds and textures on display here.

Neil has a voice that at times is eerily similar to Art Garfunkel and with the somber ‘Paint the Town Blue’ it is hard to ignore the vocal similarities. The song washes over the listener and continues the seaside, nautical feel. ‘Polling Day’ takes away from the beach and to a eerie and terrifying circus that is quite an assault on the senses. The ominous and heavy circus theme that cycles in the background does not make for easy listening, but this reviewer does have a pathological fear of clowns so this song is not for sufferers of Coulrophobia. It is experimental and while it doesn’t work for me, it again highlights huge versatility. The sequel track to the eponymous title ‘The Boy Who 2’ gives the listeners a brand new experience with a short instrumental that is pure electronica. The duality of tradition and experimentalism throughout this record is wonderful to hear as there is never a danger of complacency. Variety is what makes a great album and here we have it in spates.

The penultimate track ‘I Can’t Sleep with the Light On’ could easily have been lifted from The Flaming Lips, Soft Bulletin, with their unique style a clear influence on another absorbing lullaby that makes you thankful Burn’s took the time to figure out where this group was heading and how he planned to get them. The spaced out, reflective theme continues with the final track ‘Streetlights are like Stars’ that brings the album to back down to earth softly and with great care.

Where do we start? This album is a great success. The album contains a great mixture of old styles and new experimentalism. The folk and jazz aspects do fall a little to the wayside but the clever lyrics and clear and delicate vocals of Burn’s remain throughout. There is no point trying to categorize a record as unique as this as it would be a great disservice. For a debut album, after a hiatus, this is quite remarkable and deserves your attention.