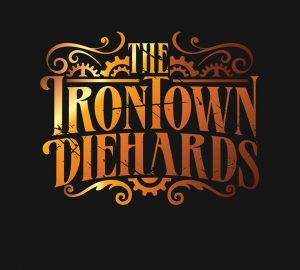 Let me explain something to you. The Irontown Diehards’ self-titled debut album is not just the best album by a ‘new’, local, rock band this year. If it was, you could say I am giving them extra marks for being new, for being local and for being a rock band. We are here to promote local music after all; there is always that risk that in our evangelical fervor, we reviewers over-egg the pudding. It’s tempting to say something is great when it is merely good, something  is good when it is average etc. We’ve all done it and I am certainly not immune.

So, I have waited a week before I even began drafting this review: A week in which I expected that immediate rush I got when the first crushing bars of ‘I Am’ came through my headphones, to dissipate after repeated listens. To be honest, I was already in a heightened state of anticipation, having seen the Diehards a couple of times and the promo video, ‘Step Inside’, confirmed my view that this was a band that had massive potential. I almost made them my ‘CB Tip of The Year’, but seeing as the band I tipped has since lost two members, the Diehards are probably glad I didn’t scud them.

The rush has not dissipated, rather has heightened with repeated listens. As soon as ‘Long Road Home’ does its rabble rousing finale to close the album out, I am straight back into ‘I Am’ again. The only command necessary for my finger is ‘play’ again; never ‘skip’, never ‘pause’. Once you step inside this album (pardon the pun), you are transported to those days when an album seemed to mean much more than it does now. If you skip a song on ‘Irontown Diehards’, you will miss something. Each song has something slightly different and yet there is still a cohesion to the sound. This is such a difficult thing to achieve with any new band trying to define its sound. Some bands plough a boring single furrow, scared to step out of their comfort zone. Some bands try too much, to the extent that you aren’t sure they know what they are, nevermind the listener. Irontown Diehards seem to have a clear vision of what they are, right down to their image. They dare to be different without being too different, if that isn’t too contradictory.

The temptation is always there for any reviewer to try to define bands by saying they ‘sound like [insert famous band name]’ , but that is really very difficult with the Diehards. There is a touch of ‘Strays’ era Jane’s Addiction (‘For The Rose’) and there’s a soupcon of Velvet Revolver (‘Long Road Home’, ‘Sick’) with Phil Dixon’s immensely versatile singing echoing the late, great, Scott Weiland on several tunes. There’s a dark undercurrent akin to Alice In Chains (‘In The Valley’), and a nod and a wink to mid-era Queensryche (‘My Pain’, ‘Fly High’). In some ways, Irontown Diehards achieve what Metallica failed to do in its ‘Load’ era i.e. convince at being heavy without having to always be heavy in every song, or even all through each song. This is music that is not derivative of anything and should have a very broad appeal. Anyone who likes Power Metal should love the visceral riffs and pounding rhythms. Anyone who likes the heavier side of the grunge era should love the grittiness and dark atmosphere. Anyone who likes a wee bit of progressiveness in their rock will not be left wanting when they hear some of the interesting chord progressions, changes of style mid-song, basslines that do much more than follow root notes. There is something for everyone who loves classy heavy rock music and gives the lie to those who say heavy guitar music has nothing new to offer the world.

I have reviewed a lot of very strong albums during my time here. I do not backtrack on my praise of almost all of them, even in retrospect after all the music I have to listen to. But Irontown Diehards’ debut album is one that I am absolutely convinced I will be listening to for many long years. I think this is because it is has so much depth to it, so many textures, so much flavour and atmosphere. Remember when each album (even those by the same band) seemed to have its own feel? This is an album that shows those days have not fully gone. It is an immediate album – so many catchy choruses and refrains to sing out loud when it is appropriate, and so many cool riffs and musical hooks to hum when it isn’t appropriate to be singing out loud (my wife questions that I know when these times are, but you know what I mean). But, while there is an immediacy, there is also a staying power.

Every great album, no matter how strong, needs more than one or two absolute killer tracks to elevate it to that ‘great’ status. Even though I will allow that others will have their own choices from the album (again a show of its overall strength), I think the band have chosen well with their two lead off singles ‘Step Inside’ and ‘Fly High’. But also for me the two (anti)ballads of ‘What I’ve Done’ and ‘Blood On The Horizon’ seal the deal. ‘Blood…’ especially is already up there with my all-time favourite tracks by a local band. Immense song. Immense vocal performance. Powerful message (‘our sons and our daughters have blood on their hands’).

Experienced musicians (ex-Stormzone) guitarist, Andrew Baxter and vocalist, Phil Dixon, may be, but to come up with a debut album this strong is a vindication of everything they have been through up to this point. They are more than ably backed up by a powerful and tight rhythm section of Mark McCallion (bass) and Gordy Gray (drums). Formed in 2014, the band has been only lightly raced like any proper thoroughbred should be, and didn’t overexpose itself to a constant ‘lazy Susan’ of local gigs – that takes self-control. There is a meticulous quality to everything the band do, be it image, songwriting and song arrangement – and yet it still all feels natural rather than sterile. This is down to the other star of the show  – and again all great albums have this –  the production itself. While you expect no less from Frankie & Luke McClay at Einstein Studios, the recording, production and mix of this album (in conjunction with band itself) is simply stunning. The levels are perfect, no matter what device or media I have listened to it on (and there have been many – how else could I listen to it 6 times-a-day for a week?) All involved must be so, so proud of their work.

So, there you have it. As I said at the beginning – ‘Irontown Diehards’ is not just a good release for a ‘new’, local, rock band. It is one of the best albums by any band, of any style, from anywhere you will hear this year – and I suspect some years to come. I only wish my words were as good as the album is….*presses repeat*. Hey Rob, what do you mean I have to listen to something else now?