by Josh Henry
in Music Reviews 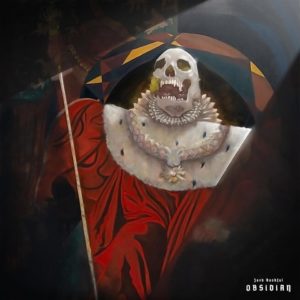 Jack Bashful aka Tom Higgins is a Northern Irish rapper who hails from Lurgan, Co. Armagh and this is his first album and follows an EP ‘Fictional Clientele’ (March 2018) and a beat tape ‘Hushed In Blue’ (June 2018). The rap scene in Northern Ireland has long been sparse compared to that of down south which has bred acts such as Rejjie Snow, Kojaque and Hare Squead who have both found audiences overseas. The album was recorded at Skank FM in Belfast with fellow rapper ‘Daz Darryl Forsythe’ who have largely been responsible for cultivating a Hip Hop scene in Northern Ireland.

When I saw the announcement for the album I was immediately drawn to the artwork which was beautiful and created by the sister of Bashful, Amy Higgins. The gothic while divine nature of it depict the two opposing forces at play thematically throughout the record. The album begins with ‘Rebel Without a Cause’ with a beat that is reminiscent of a Madlib beat on 2004’s ’Madvillainy’ with MF Doom. Production on this track comes courtesy of ‘cblak’ who is featured on ‘Draw Out’ also. Bashful employs clever wordplay with the line ‘I’m in a box I don’t fit in at the minute/I’m at the top I don’t think there’s a limit’. This is typical of Bashful’s lyricism as it can switch from anxious to braggadocio in seconds.

On ‘Gain’, there is a heavy grime influence with the beat as well as the hook which had a Skepta circa 2016’s Konnichiwa feel to it, this allows Bashful to flex his technical rhyming chops with a double time flow. On ‘The Sixth Borough’ there is a homage to New York with the 90’s boom bap beat which sounds like it came straight out of the hands of DJ Premier. There is a change of pace on the sixth track ‘Long Live Castro’ . Bashful is un-phased by the unconventional Latin guitar led instrumental as he confidently states ‘Yeah I can rhyme on this’. The tracks focus being Cuban revolutionary Fidel Castro, he identifies with his rebellious spirit while opposing Christopher Colombus. This track also allows for some humourous wordplay with the line ‘It’s way too easy like offending a vegan’.

On the final third of the album, many of the layers and mystery of who Jack Bashful is are stripped away as he touches on his anxieties of letting people in as well as accepting himself as someone who is different.  A particular line that stood out was “If I opened up I don’t think I would close”, a line that encapsulates the experience of an introvert. The beats become a lot more ominous in tone and allow for more dark lyrics as Bashful details his feelings of isolation. In the final song ‘W H Hartley’, he raps “If you want to drink to solitude, I’ll drink till I choke”. The name on further inspection relates to one of the violinists on the Titanic who kept playing until the ship sank. This seems to mirror the state of  mind of Bashful who is solely focused on his craft.

The one weakness of the album is that several of the tracks notably ‘Jetpack’ and ’Summit’ felt a little too short. With a little fleshing out, the album as a whole would’ve been even stronger. That said on Obsidian Jack Bashful has set a benchmark not only for Northern Irish Rap but for an independently released Northern Irish album in 2018. He paints a portrait of mystery and stubborn individuality, traits shared by the volcanic rock that the album is named after. Yet he also manages to portray the duality we all face in life; the good and bad. In doing so Bashful can reflect on a job well done and the hope that the quality of talent shown here might inspire a new wave of Hip Hop/Rap artists to pick up a mic and start something special.

Zeal – Queen Of The Rodeo EP